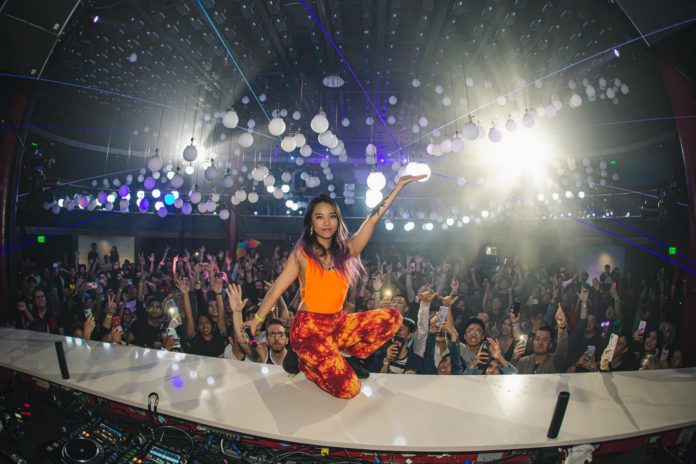 (Atlanta, GA)— From being the face of Spotify’s Friday Cratediggers playlist, to her live-streams on Twitch, if you follow electronic dance music, there’s a solid chance that you’ve seen the name JVNA recently, and for a good reason! With her mixes including tracks from artists such as Illenium, Slander, Excision and Wooli, it’s clear to see caught the attention of headbangers worldwide. But for every “top-10-banger” in her set you’ll also find an underground ID mixed in as she takes pride in finding the smaller artists that throw down just as hard! JVNA brings even more of a unique energy to her sets through her original tracks and remixes with her very own vocals, melodic bass, and futuristic vibes all throughout.

You can catch JVNA on her City Of Dreams tour all this spring as it makes stops all across the country. Whether you catch her at an intimate, club venue or maybe at festivals like EDC Las Vegas or Sunset Music Festival in Tampa, JVNA is sure to throw down a set you’re not going to forget!

RC: Let’s get some background to start. Where did you grow up and how did you get introduced to music?

JVNA: I studied piano my whole life and other instruments like the cello. Then I wanted to learn how to sing when I was 10. I took singer/songwriter lessons and my teacher asked if I would like to try producing. He taught me how to produce off of a program called Reason. It’s not popular now, but it was popular back in the day. I made very  basic pop tracks, maybe just a guitar or a piano, vocals and drums, that’s it. Then I just kept messing around with whatever genres I wanted to do. Eventually I went to music school for classical music and I graduated last year.

JVNA: Thanks. I wanted to do film scoring and stuff like that, but while I was studying classical music, I thought it was boring. And then my ex boyfriend started taking me to raves. And at first I was thinking, “What the heck is this? This is so bad.” Then he broke up with me and I was so petty at the time. I wanted to learn how to make it, so I tried and it was so hard. This is so different than classical music. Then I ended up loving it and I started realizing that EDM is challenging to make.

RC: Who were some of your influences when you started and who/what do you look to for inspiration now?

JVNA: In the beginning I looked up to Mija, Alison Wonderland or Tokimonsta, all these female DJS. They are so cool and I wanted to be like them. I remember looking at videos of Alison or Mija at a festival, and they were doing their own thing. I’m thinking, “Wow, can I ever do that?” Nowadays I still look up to whoever inspired me back then; but now I’ve been looking for inspiration outside of electronic dance music. I listen to a lot of pop music or artists who aren’t really big yet. I like listening to music on SoundCloud because there’s so much creative talent out there.

RC: Yeah, you can run into some gold out there. Okay, name an artist you would love to collaborate with?

RC: Yeah, it could be EDM related or any other genre

RC: Okay. What about EDM?

RC: Hell yeah! So your mixes are a vast combination of different genres from future bass to melodic dubstep. How do you choose tracks that go well together?

JVNA: Yeah, I’ve been wondering about that lately; because even with my set today, I’m just playing a lot of different genres. Part of me wants to stick to something; but the thing is, I truly like it. I have some stuff that’s not melodic bass or future bass, some mid tempo stuff. I do feel like the genre of melodic bass still resonates with me the most. But I don’t want to box myself into just a genre. I like trying to be open-minded.

RC: When I first discovered your mixes I felt that if I were a DJ, that’s the kind of music I would play. You literally play every single song that I love.

JVNA: Really? I don’t know how to pick a song that I don’t like….I just like it or not.

RC: You sing on most of your original tracks. Was that a natural progression or was that suggested to you?

JVNA: Oh, it was just something I always did. Part of it was just because if I was tone deaf at singing, I wouldn’t have attempted it. I thought I could sing somewhat, and all I had to do was process the shit out of the vocals. Then it eventually became my thing, and then I thought, “Okay, I should probably try to improve.” So I just practiced a little more, and I’m still practicing everything. I think the way my voice sounds, it fits the kind of sound style that I go for. I think I write music around the quality of the tone of my voice, because my voice is kind of  airy and light. I like to contrast that sometimes with really heavy bass production, but with also melodic elements.

RC: So, let’s talk about your very first gig. What is something you remember about that experience?

JVNA: Oh, yeah, it was at a restaurant. Okay, three years ago, maybe two and a half actually. Back then I was posting videos of me on the Abelton Push, drum padding and stuff, and then this local group who hosted the shows every Friday asked if I wanted to play. I found out that my friends were doing it as well, so I thought it was a comfortable enough environment. I played only one of my own songs that I had out back then, and I remember being so nervous for it. I had to learn how to DJ for it, and there was only like three people in front of me. Like one of them was my friend and I was so nervous.

JVNA: *silence* It was… okay… *laughs* It was one of those weird settings where it’s a restaurant, and people are just there eating doing their thing. For some reason or another they have EDM played at that restaurant. There was like three people raging in the crowd. It was one of those types of events! I loved that!

RC: As one of the top rising electronic producers, have you experienced any moments that have made you think, “This is what I do it for?”

JVNA: You know, I majored in music so I have no other choice. I don’t have a 9-5 job. I gotta have a degree in Math or English or Politics. I don’t really have anything to fall back on besides music. So it’s always been like that, even before I made a full-time living out of it. I’d say to myself that I had to do this no matter what. I don’t care if I have to teach piano, I don’t care. I’ll teach at a school. Whatever I do has to be music!

RC: That makes sense. I’ve heard that you like anime. Do you have a go-to?

JVNA: Obviously, I’ve watched all the classics like Naruto, Bleach, Death Note, and all that. Production-wise it’s Guilty Crown. I love the music. I like Guilty Crown because of the drawing aesthetics. The music is sooo good! Both the film score and the soundtrack by Supercell,

JVNA: I want to say Guilty Crown because actually that whole style visually is similar to my tour style, my City of Dreams tour.

RC: That brings me to my next question. Which of your songs would you choose as an opening theme for Guilty Crown?

JVNA: Honestly, I don’t know if some of my songs fit, but I think “I’m with you” could fit. Definitely not like “Living in Hell!” I don’t know. Maybe it could be one of those endings.

RC: Okay, so, one last thing. I am going to name 9 artists that you play in your mixes, and you give us the first word that comes to mind for each.

RC: That is very true!

JVNA: Dope af! All of his drops are so good.

RC: He was really good at this game. He was hilarious.

JVNA: He’s one of those artists where there’s not one song I don’t like from him, you know? Yeah, he’s great.

JVNA: Awesome! Love him. Wooli is one of those other people, everything they put out is just so good! He’s a great dude too.

JVNA: *whispers* I was going to say EDM Jesus. But that’s cringe, and not one word. *laughs* I don’t know what to say to not sound weird.

JVNA: Guitar! There is a lot of guitar in his songs.

RC: Okay. And one more JVNA.

RC: That wraps it up from us. Thank you so much.