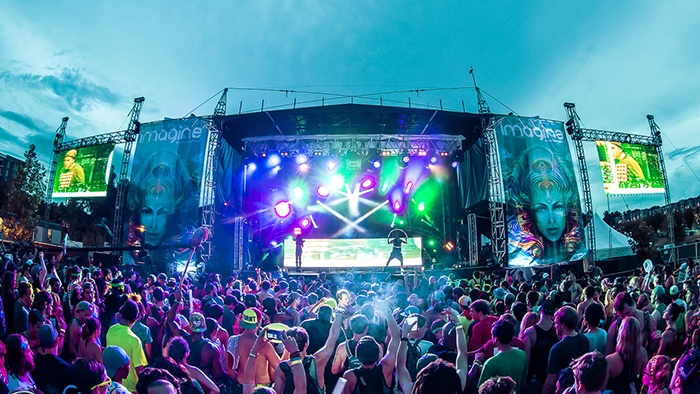 Imagine Music Festival is located in the heart of Downtown Atlanta along the beautiful Atlanta Beltline. You really can’t get much better with the scenery of the Historic Fourth Ward Park and Masquerade Music Park. Watching the sunset each evening last year was a great addition to some of the fantastic performances and vibes at the festival. With IMF being very close to downtown Atlanta, it can be easily accessed from pretty much anywhere you might be coming from. Along with a great location, hotels are widely available around the area for those who are traveling long distance to attend.

Once again, this festival has delivered a diverse lineup full of amazing talent across the board. Imagine Music Festival truly mixed things up this year by keeping it simple, but still bringing some well-known names that everyone will enjoy. Electro house duo Dada Life will turn the festival into Dada Land and make everyone go a little bananas. Morgan Page and Felix Cartal will bring some incredible uplifting progressive and electro tunes that house fans will absolutely love. A few legendary acts will also be joining the fun. There will be some classic drum n’ bass from the veteran group Black Sun Empire, along with the one and only,The Crystal Method bringing their unique breakbeat and alternative sound. Plus, there’s definitely no shortage of bass on the bill this year. Trap and fans will rejoice with the likes of Brillz, Crizzly, K Theory, and Buku. We can’t forget the dubstep superstar Datsik that will lay down some serious bass on the main stage. Also we will get a special treat with dj set from Atlanta’s own King of Crunk, Lil Jon. Talk about a wide-spread layout of genres, right?

When the tickets first went on sale last fall for 2015, they were priced at a surprisingly low $50 for GA and $150 for VIP. Currently, tickets are still at a bargain of $129 for GA and $229 for VIP. With a lineup as stacked as this year’s, there is truly no reason not to jump on that cheap of a price for a 2-day festival. You won’t find another festival this summer with a price this low, that’s for certain. The prices are also subject to slightly increase just before the festival, but not by much. You can get tickets for Imagine Music Festival here.

4. Intimate feel with a convenient layout

Smaller, more intimate festivals like IMF can be a wonderful experience. Unlike a huge commercial music festival, the venue is slightly smaller which means less walking for you, and more chances to hear as much music as possible. It’s nice to be at a festival every once in a while where you don’t have to walk what seems like a mile to get to another stage. If you want to hear something else, the next stage is just a short distance away so you won’t miss a thing. Along with the convenience of the venue layout, the crowd is not small, but it is not overcrowded either. It really does create a more intimate feel with a crowd that’s not packed like sardines at a stage.

5. The after party activities

The party won’t stop when the event has to close each night. Imagine Music Festival will be hosting after parties following both days of the festival. On Saturday night, there will be two after parties: one at the Masquerade, which is conveniently located right next to the festival’s venue, and the other being at The Iris venue which is only about a 15 minute drive from the venue. On Sunday night, the after party will be back at the Masquerade venue. The doors will open at 10 pm and close at 3 am each night. The best part about having an after party right next to the venue is that you only have to take a short walk across the park to get there after the music stops. Most 2-day festivals like IMF have their after parties, if they have any, at a different location. Imagine is providing you with an after party literally right next door to the festival’s venue. So the party will quickly move inside where you can rage on until the wee hours of the morning.


Check out the awesome IMF 2014 official after movie, and relive the special moments from last year’s festival. Deorro vs. Adrian Delgado All I Need Is Your Love (D!RTY AUD!O...