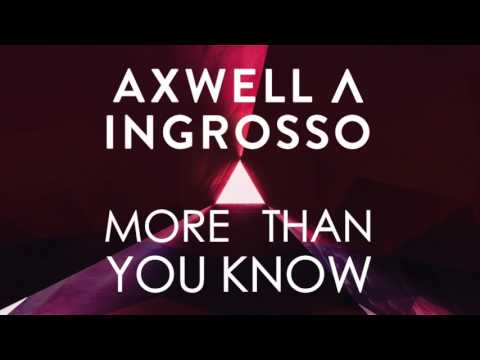 It’s the dawn of a new era for dance music icons Axwell Λ Ingrosso as they gear up for their most highly-anticipated release since their Swedish House Mafia days. This Wednesday 5/24, the re-invented duo finally unveil their More Than You Know EP in conjunction with their internationally-televised performance at arguably soccer’s biggest club tournament match, the UEFA Europa League final.

Axwell Λ Ingrosso have been teasing their global fanbase for the past month, releasing “Renegade,” one of the singles from the EP, to widespread acclaim and cementing their status as innovators by achieving a world-first in premiering the entire music video via their instagram story. Not only that, the art for the EP and aforementioned video were directed by Francesco Ragazzi, frequent collaborator with hip-hop paragons Pharrell, A$ap Rocky, and the genius creative behind brands like luxury fashion giant Moncler.

The EP release also follows their previous single “I Love You” feat. platinum rapper Kid Ink breaching the #1 spot on both the Billboard’s Dance Club Songs chart as well as the Mediabase Dance charts.

All in all, Axwell Λ Ingrosso are continuing to push the envelope while maintaining their standard for releasing great dance music. The guys are available for limited interviews and advance copies of the EP are available for review purposes.

Foxes reveals how she got her name and her hopes to work with Calvin...

The rise of the party drug MDMA