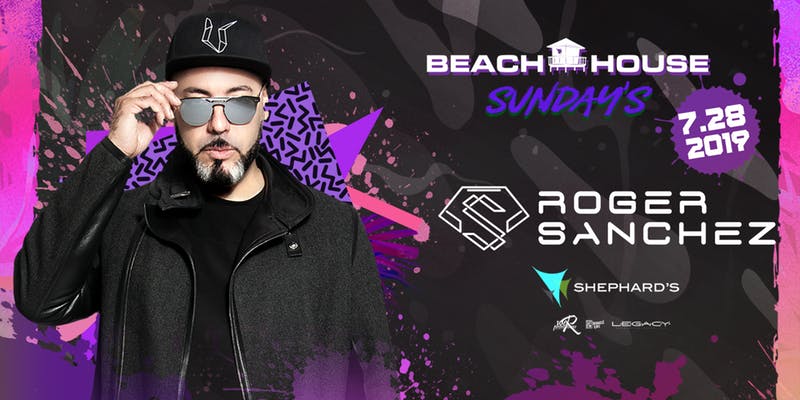 A revered house music legend by the name of Roger Sanchez will be once again gracing Tampa Bay wit his presence on Sunday, July 28th at Shephards Beach Resort in beautiful Clearwater Beach, FL. For those who might be asking, “Who is Roger Sanchez?” Well, our rock dwelling friends, Sanchez has some deep roots in the iconic New York house music scene; and he has been a major part of the building blocks that helped to further shape the foundation of the American house music movement.

Since the early 90s, Sanchez put his talents into works from major artists of that decade like Babyface, Michael Jackson, Diana Ross, Janet Jackson, Chic, just to name a few. He has produced so many memorable tracks under different monikers like S-Man, Roger S., Natural Born Lovers, The Nu-Solution, Underground Solution, DV8, Ego Trip, El Mariachi, The Funkjunkeez, Tribal Infusion, Twilight, and Transatlantic Soul amongst others- all of which contain their own unique styles. Throughout his career, he inadvertently slipped into a remixing role for a while between producing original works under his different aliases. He has produced remixes for a wide range of artists including, Michael Jackson, The Police, Diana Ross, Jamiroquai, Maroon 5 and even the So-Cal punk-pop outfit, No Doubt, for which he won a Grammy in 2003 for Best Remixed Recording with the song, “Hella Good,” and that is just listing a few of the many.

The last 5 years have proven to be some of Sanchez’s most prolific and creative years to date. Following the resurgence of his beloved S-Man alter-ego in 2014, Sanchez relaunched his Stealth Recordings label, along with starting a new label, UNDR THE RADR, releasing some work under S-Man like “Dangerous Thoughts,” and collaborating with big names like Huxley, Tough Love, and Man Without A Clue & Kevin Knapp.

Constantly evolving on his brands, always pushing himself to improve as a musician, the S-Man sums it up perfectly when he states: “I’m always moving forward, but never losing sight of where I’ve been.” On Sunday at Shephards Beach Resort, the man, the myth, the legend, Roger Sanchez will put his immense talent on display for all to enjoy, and take fans on a musical journey as he has for so many years. If you haven’t already secured your tickets to the show, we ask of you, what are you waiting for? Head over to the special Eventbrite page right now to snag your tickets, as well as information on purchasing VIP tables. See you on the beach for some groovy, floor shaking house tunes by the one and only S-Man! Interview: She is Leah Culver (VIDEO)