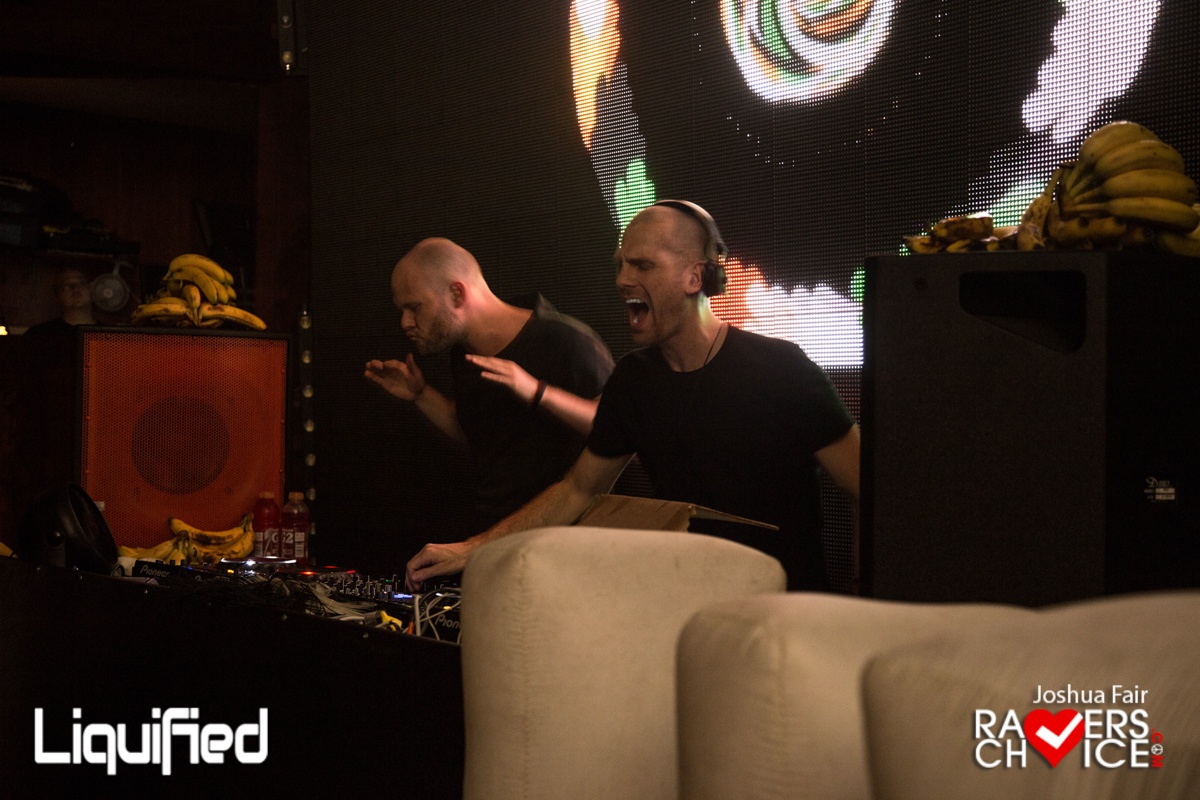 On the evening of August 30, 2014, the city of Atlanta became what is known as Dada Land for the night. According to witnesses, the city became ugly, and the two men from Sweden who call themselves Dada Life had taken over. No one knows why or how it happened, but that night, things got ugly in a hurry. Stores everywhere in the city were oddly experiencing a shortage of bananas and champagne. People were walking the streets with giant smiles on their faces all night. I can tell you right now that the city of Atlanta, I mean, Dada Land, will not be the same. Honestly, this was the first time anything big from Sweden came through the South besides Swedish Fish, so we were sure to be in for a treat. The DJ’s took to the stage by storm that night. The venue was packed from wall to wall to be amazed by the Swedish house duo. The stage was lined with bunches of bananas and in huge letters the word’s, “DADA LIFE,” were surrounding the DJ booth. Large inflatable bananas and champagne bottles were being volleyed all over the crowed. Many of the Dada Land citizens were handed large, goofy smile masks for them to wear throughout the show. Dada’s stage set up was absolutely incredible, and you could just feel that it was going to be a great show.

Dada Life played a set to be remembered that night. The guys played some of their classic hits like, “Kick Out The Epic Motherf*cker,” and my personal favorite, “So Young So High.” Also Dada also threw in some of their newest singles that we all know and love like, “Born To Rage” and “One Smile.” Of course, the guys sprinkled in some of the fattest, most juiciest tracks in EDM that made the crowd go –dare I say it?– bananas! The show did not stop there. Towards the end of their set, the people in the crowd were handed pillows. What do you think happened after that? Well, a pillow fight occurred, that’s what! The citizens of Dada Land was asked to make some “Happy Violence” with some fluffy pillows, and sure enough, that’s exactly what happened. Dada Life has recently set a record back in 2013 and made the Guinness World Records with the world’s largest pillow fight in Chicago with nearly 4,000 people involved. Now, it seems as though the guys make it apart of their shows, which makes their sets that much more enjoyable. Below is a video captured via cell phone of the first ever pillow fight at Opera Nightclub.

I believe the city of Atlanta truly did change over to Dada Land for that night, and I’m not sure that it can actually go back to Atlanta anymore. The crowd arrived beautiful and left ugly. The set was amazing, the place was packed, and the energy was something next level. As Dada Life always says, “There are no rules, but the rules of Dada.” Sure enough, all everyone needed was one smile, and they gave them all night. The citizens of Dada Land had smiles on for days before they finally wore off from that epic show from Dada Life.