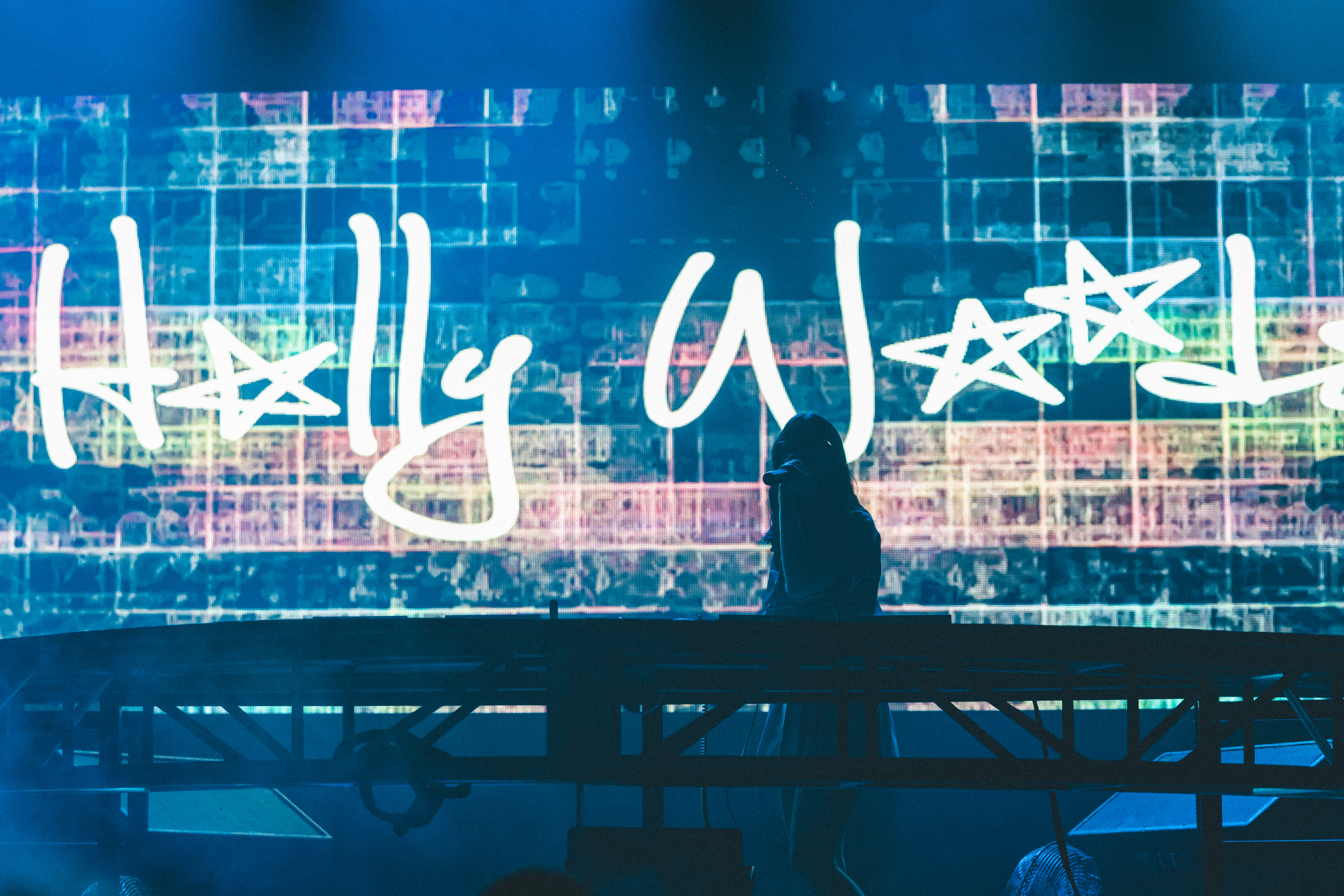 Rachel Woods, otherwise known as her stage name, Holly Woods, is an up and coming producer from Louisiana. While she attended Florida State University, she credits living in Florida and the Tallahassee dance music scene where she truly began to develop her talents as a budding EDM producer and DJ. Her ability to go all in after what she wants is something that separates her as an artist from the rest. Rachel’s producing ability comes from the heart through coming up in the Florida dance music scene. She doesn’t like to be a follower, and it shows within her production.

Holly Woods was able to play Sunset Music Festival for the first time this year, even though she was supposed to play in 2018, but unfortunately did not get that opportunity due to the second day of the festival being cancelled. She truly believes that she was meant to play SMF, which is why she was brought back to do it again this year in 2019. We got the chance to catch up with Holly Woods after her set to talk about a number of things including her early life, how she became a DJ in the Tallahassee club scene, her ability to play an instrument, and how she has received an amazing amount of support from her friends and fans embedded in the Florida dance music scene.

This is your first time playing Sunset Music Festival, correct? What are your thoughts after your performance this afternoon?

Yes! It was awesome. I was supposed to play last year, but on the second day. Sadly, it was cancelled and I didn’t get the opportunity. This year I got to redeem myself! I am a firm believer that everything happens for a reason, and I was meant to play this year.

Was it everything you expected? How was the crowd at your set?

You know, I really don’t want to say that it was better than I expected, but…

Don’t be modest, you can brag. You just played at a very popular music festival in the southeast!

You’re right! It was amazing and I really had a great crowd for my first time playing here. Everyone was dancing and having a great time from what I saw.

I noticed that you went to FSU. Is that kind of where it all started for you becoming a DJ?

Yes, I went to Florida State and graduated in 2018. I used to play this party called Bass Parade and that was where people just wanted to party. The scene in Tallahassee is more like a party scene since it’s a college town, but the music scene itself is still kind of developing. I used to just go and play a lot of college bars just to try and get my name out there. I didn’t even know that I wanted to actually make music then, I just really loved to play it. And then once it all came together, my Tallahassee group, my family, people I don’t even know personally who just went to school there still support me because I went there. It’s so cool that it’s like that there at FSU.

So, it’s safe to say that, perhaps, Florida is like a home away from home because of your Tally fam?

You could say that. People there at FSU and Tallahassee just to stick together, you know. I thought it was so cool that I saw some FSU flags at my set; and I’m sure some of those people might not have been around when I started, which is amazing to think about.

Out of these different places that you’ve lived in the past, is there anything that you gathered from living in different cities that helped with your creative process as a producer?

I think that most of my creativity just came internally to me. I would say that it’s more from the people that I’ve met and have influenced me in some sort of way. I have met so many people in this scene and industry through my journey. Everyone is just so different and everyone likes different things, so that kind of helped me with the understanding of the difference of people that not everyone is going to like what you’re putting out. I guess to really answer this, my music tastes truly curated here in Florida. There are so many shows and festivals going on here that this is where I really got to find what I liked.

Speaking of people not liking what you’re releasing musically, there are some artists out there right now in EDM who’s names shall remain anonymous that have a hard time dealing with that kind of criticism on social meida. Do you ever pay attention to that at all or do you ignore it?

Actually, I do. I try not to often because that sh*t is toxic. I worked in social media and went to school for social media marketing, and it just showed me that you can’t be so involved with it and paying attention to what people are doing. Social media just allows people to show the cool things happening in their lives and not so much of the failures. It’s so fake at times, and I hate it!

Let’s talk about Holly Woods. I noticed that you could play violin. Do you ever include that in your sets?

Not every set, I try to just feel it out. I didn’t play it today because it was a daytime set and it’s really hot out here. It’s a down-tempo vibe, and it’s pretty; so I didn’t think that it would fit in this environment or, say, like a pool party. I plan to start incorporating it more in the future when I am curating my own shows or touring. When people come to see Holly Woods, that’s what kind of experience I want to be able to give them in the future.

I believe that a live music experience can really set you, as an artist, apart from the rest of the electronic music world. If you can give some fans a live music experience that might not be that into the DJ aspect, they can get something more out of it as well. What would you say is the most challenging thing about being a musician playing an instrument and a DJ in a club setting?

That’s a great question! I have learned that being a newer artist in the industry, it’s really difficult to convince a promoter that you want to bring in an instrument. Some club owners don’t get that and they just want a DJ up there. When you’re on the lower end, they don’t really see a need for you to include an instrument; but when you’re at the top they are like, “That is the best thing ever! You can bring that in no problem.”

The live set experience seems to be trending among the top. Gorgon City, for example, does this very well. They include live vocals and everything. Have you thought about including some vocals in your tracks and live sets as well?

Absolutely! I have been working on a lot of new music that I think is going to have that. My first wave of music, I really wanted to create it myself. My music is kind of raw, and very personal to myself. I tried to record my own vocals and used other people as well, but it didn’t really work for me. My new stuff coming up, however, has vocals from myself to other people as well.

I like that you have that approach to your first set of music you released. You can tell that it comes from the heart because there isn’t this cookie-cutter formula that you used to create your art.

I don’t like to follow the rules. I find something that I like, and I keep building off of it. My song “Oblivion” made me so nervous to release because it’s really out there, and not the norm. I was worried about what everyone would think about it, but it’s just something that just came out of me and I went with it. If you’re making music that is out of the box, that’s just how it’s going to be for some artists.

What was your first gig like? I want to know, did you bomb, or did you do well?

Oh, my gosh, here we go! So I was working at a club at the time in Tallahassee. I was so into the music played and the crowd. I was like f*ck this, I want to do this myself. My current manager, who was my boss at the time at the club, told me to come in and play him a set and he would let me if he liked it. I was told that if they liked it, I would be able to play for the opening 30 minutes of the club night from 9-930. I practiced and practiced on my little Traktor S4 controller, went in, and played a set for them and they liked it. So I got to open for the night and only four people were there to start the night. Three of the four were my friends and there was one bartender. I didn’t even care who was there; I just wanted to play music. I don’t think I bombed at all, I think I did great!

In this male-dominated EDM industry, do you find it challenging with being a female artist trying to make a name for yourself or does that even impact you at all?

In my world, I see everyone as nice and welcoming. I’ve never really had an issue of gender inequality in this industry from my experience. I’m not sure what people might say behind closed doors, but everyone seems to be encouraging and supportive about my journey as an artist. Even if it’s a show that I’m playing that is pretty far away and it’s all dudes, people seem to be like a big brother to me. I’ve never really had a bad experience that could be connected to being a female.

Perhaps it’s your personality that positively impacts everyone else you meet?

I think that might play into it. I am very shy, if you can’t tell. I’ve been this way since I was a kid. I think I’m shy as Rachel, but when I’m on stage as Holly Woods, I am in a different world and that’s just me. That is my true self. I feel like that is the more expressive version of Rachel. I feel more comfortable on stage performing. Especially when everyone I’ve worked
with is so nice and welcoming.

Being the shy person that you are, do you get nervous to get on the mic and talk to the crowd at all?

Yes! Oh my god, at first, I was not about it because it was so scary. I have been told that I’m awkward when I speak on the mic. I think I have conquered that fear now. Sometimes when I am in the moment, I have no filter and I feel like I end up saying some stupid things, but it’s getting better for me!

Are you excited about playing the after party at RITZ in Ybor tonight?

Yes! I am so excited to get back out there and play more. Illenium is headlining and it’s so exciting to open up for someone that I really look up to as a producer. I can’t wait!