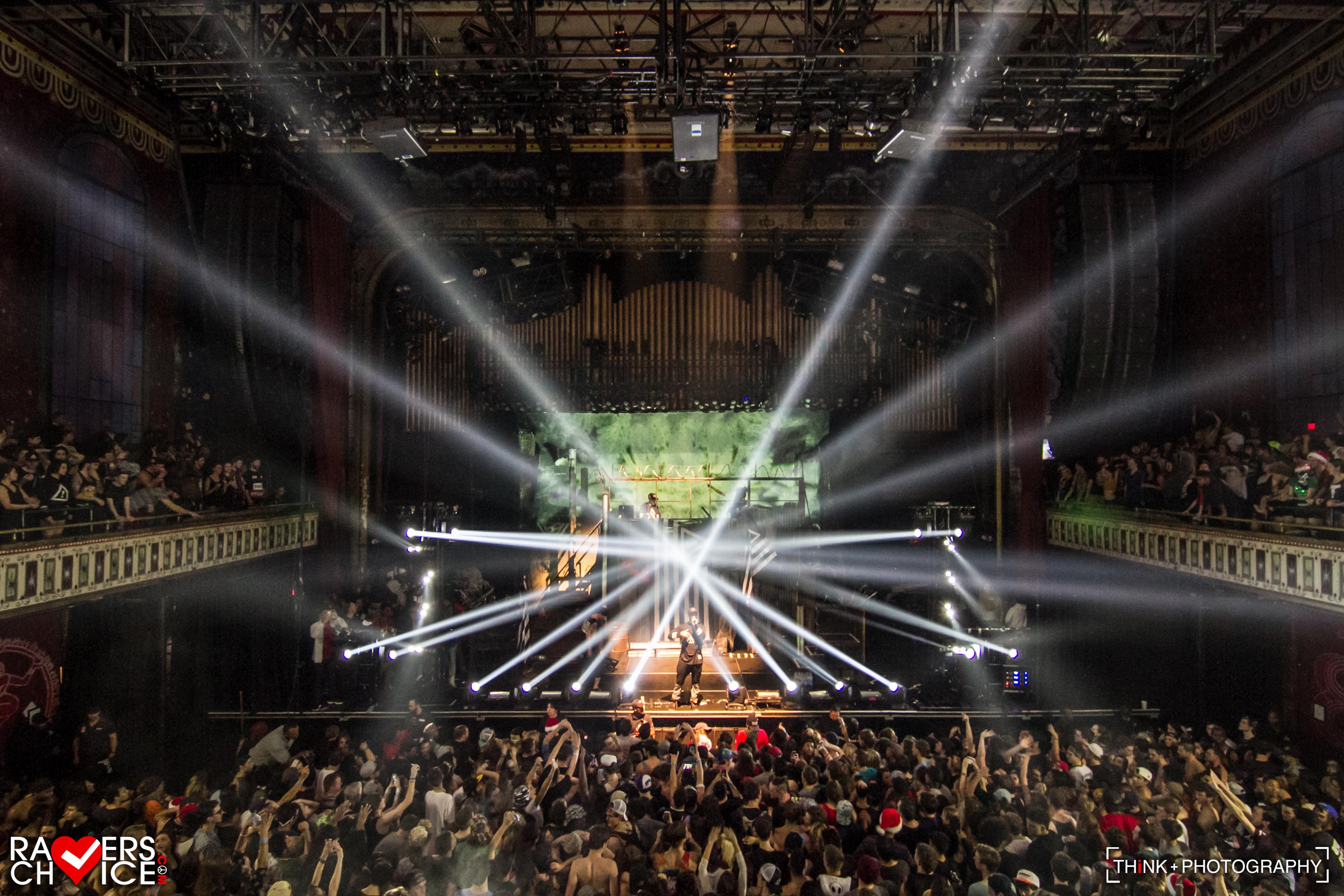 Just recently, the trap music icons known as Flosstradamus came into Atlanta to play what most could argue the best show they’ve had in a long time. This was one of the last few stops before the duo’s huge HDYNATION 2014 Tour came to a close. I don’t think there could have been a better time than to put Atlanta, the city where the trap movement started, on the tour schedule. HDYBYZ and HDYGRLZ from all over flocked to the Tabernacle on a Saturday evening just before Christmas to see a show that many of the attendees were unprepared to witness. Along with Flosstradamus for the night was Curtas Williams with Two-9, and GTA. But little did the fans know, they were in for a huge surprise with the special guests Floss was also bringing.

Although it was a rather chilly December night in Atlanta, loyal fans of HDYNATION braved the cold and gathered early outside the historic Tabernacle venue to see their beloved HDYBYZ. Fans were covered in their floss outfits ready to throw those warning signs up!

The place was rocking the entire time. Both of the openers did a really great job hyping up the crowd just before Floss came on. Aside from Flosstradamus, I am a fan of GTA as well, so getting to enjoy them to start the night off for me was a treat. GTA was a strong addition to this tour because they cover different genres; so that changed it up a little and packed a bass punch for the audience.By the time GTA was finished, the crowd was all amped up to see Flosstradamus perform next.

The guys came out on stage with their HDYNATION flags flying high and opened the set up with their newest banger that is highly anticipated, “Prison Riot” with GTA and Lil Jon. Here’s a video below of the unreleased track from this show. You can see in the video just how intense that pit was for this show as well.

Floss continued to play a killer set with heavy trap and hip-hop music, and throughout the night they brought out their special guests Travis Porter, Mike Will Made It, DJ Spinz HOODRICH, Rae Sremmurd, Casino, and of course, Waka Flocka. All of these guests that Floss brought out played a role in their successful career. Floss was literally taking the crowd on a journey through their set with guests to show how they got where they are today. Floss wanted to show Atlanta how and why they call Atlanta their second home. Some of the fans did not quite understand why the guys were bringing out a lot of special guests, but I saw it as a huge tribute out of respect for all of those who had helped Flosstradamus along the way. I felt like there was no better way than to bring out these Atlanta all-stars in front of a hometown crowd. I think most of the fans who really know where Flosstradamus came from did in fact appreciate them not just making the show about themselves here. It truly showed how selfless these guys really are by sharing the spotlight, and that they are grateful they have had big time support from both artists and fans.

The show had some memorable moments like Rae Sremmurd and his crew coming out and performing, “No Flex Zone,” Waka Flocka dancing in the crowd, and Casino coming out to rap his part in, “Mosh Pit.” Of course, what would a huge Floss show be without the famed mosh pit, right? The crowd had a couple mosh pits throughout the night and even one big wall of death toward the end! The show was nonstop fun and I feel like that might have been one of Flosstradamus’s best shows yet. I was even able to speak with Casino after the show, and he said, “This show right here… Man, I can’t believe how awesome it was. That crowd vibe took me back to when we played in Vegas at EDC. It was one of the best shows we have done all year, I think.” I couldn’t have agreed more with Casino; the crowd’s vibe was unbelievable. I left the show with more respect for Flosstradamus after seeing how well they were able to take the audience on a journey of their success story.

Flosstradamus really goes beyond just EDM, the guys have been a big help in the Atlanta hip-hop side of music as well. Floss always claims to have much love for the city of Atlanta because it was such a huge part of their come up, so it truly is like a second home for them. They perfectly mixed together a performance full of incredible trap music along with some great hip hop songs thrown in. I can easily say that this was one of the top shows that I have had the pleasure of covering in 2014. If you’re into high energy shows with heavy hitting, hip-hop influenced trap music, then Flosstradamus is definitely worth your money.

Dash Berlin: King of dance charts with new ‘We Are (Part 1)’ CD