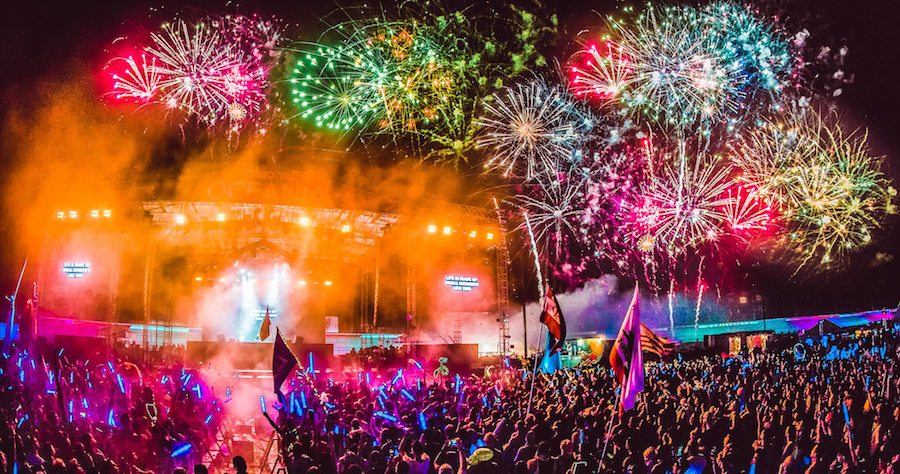 Wow, Imagine, just simply… Wow! That is the only word that I can use to describe the second installment of the newly revamped Imagine Music Festival. Since last year was the inaugural event for this festival expanding to 3-days and adding camping to the mix, the bumps along the way, while some were expected, raised a few concerns among Imagine’s festival attendees. There were some good aspects of the 2016 Imagine Festival that folks recognized, but there were also a few areas that needed some evaluation for improvement from 2016 going into the 2017 year. Imagine gracefully took those obstacles in stride, and handled this year’s festival with poise and a confidence that gave them a totally new look and atmosphere this time around. One would like to believe that the fans certainly noticed the improvements as well.

As someone who attended each IMF since the beginning stages, I can tell you that I, too, noticed some areas of improvement that enhanced my overall experience while at the festival. Upon arriving to the speedway, which having the option to come in a day early made this much more enjoyable, we were able to easily set up our campsite and get prepared for the weekend festivities. Having that extra day to get set up and ready to go is a must-have, in my opinion. It was great not having the rushed feeling to get the campsite set up in time to be able to enjoy some good sets like arriving the day of like last year. The extra day also gives people time to get more acquainted with the grounds, the market place and food vendors, and the other amenities to enjoy throughout the weekend. Kudos to Imagine for adding the “early bird” arrival camping options for those looking to attend.

A post shared by Imagine Music Festival (@imaginemusicfestival) on Oct 3, 2017 at 1:28pm PDT

For the aesthetics of the festival, I give them a bravo for being much improved on that end of the spectrum. This year, everything inside the venue was properly marked and amenities were easy to locate. The overall look of the festival was night and day compared to 2016, which was a great takeaway. Aside from a few hiccups the festival saw as a whole, the event went well from my observing point of view. There were maps readily available, helpful staff members to get you pointed in the right direction, and plenty of free water that was easy to locate around the festival grounds. This was a much better improvement from last year. There were a few problems that ensued, which is expected when you have tens of thousands of people to deal with coming through the gates each day. The lines were a little congested, leaving attendees waiting exceptionally long wait times to get inside the festival. Luckily, IMF took the obstacle in stride and opened up an additional entrance to help alleviate the wait times. In my opinion, I believe that this second entrance should have been in the original plans due to the sheer amount of Imaginers walking through the gates of the venue. We think that this will certainly be addressed for next year’s festival, believe us.

Let’s talk about the noteworthy stages and standout performances for Imagine Festival 2017. As for the main stage, Oceania, what a fantastic lineup from days 1-3! It had a wonderful mix of the top DJs of bass, electro, house, and even a little trance thrown in. The atmosphere was impeccable and the sets made for a great time at that stage. Some of the biggest sets from Oceania were MK, Illenium, Above & Beyond, and the legendary, Deadmau5. I think the only negative I had from that stage was that the sound was a little lacking if you weren’t in the dead center of the speakers at the stage to get the full sound production. If you were on the sides, the sound seemed to be at a lower volume, and it was missing that “oomph” factor. The Amazonia stage was off to its own on the other side of the venue, nestled next to turn 1 and 2 on the speedway. The stage was eclectic and was home to a wide range of genres with some big performances from Big Gigantic, STS9 and Pretty Lights. The stage had that “trippy” feel to it, and the whole aura of the stage’s environment made you feel like you were in a separate world from the rest of the festival. Last, but not least, my absolute favorite stage of the weekend was Disco Inferno. It was possibly one of the top stages of the entire festival from the production to sets across the board. I have been waiting for a festival in the south to bring a heavy hitting house music lineup like this one, and boy did IMF deliver some heat, literally! Both Saturday and Sunday was just full of some dirty and grimy house tunes. Chris Lake laid down some rompers as the sun set on Saturday evening, which paved the way for the rest of the weekend’s house festivities. Nora En Pure gave fans a new feel to the house genre, bringing her unique style of an indie dance and deep house blend. Her laidback tone was a great set up for the rest of the weekend for house music fans at Imagine for sure. As for Sunday on the Disco Inferno stage at IMF… Oh my, what a damn party that was! The Dirtybird Players came in on Sunday and absolutely destroyed that stage from the open to close. Ciszak set the pace with his rump-shaking Brazilian twist, playing some heavy bass lines and some groovy deeper tunes. When Will Clarke took the decks, oh my lanta, what a show that was! There’s not much that I can say about that set as I feel like he laid everything he had out on the crowd at Disco Inferno. This man was laying down more flames than the flamethrowers behind the stage, and we all know that those damn things were just about singing everyone’s faces by day 3! I believe that the stage was nothing more than a metaphor for what these DJ’s performing at Disco Inferno were delivering last weekend, which was pure flames.

The main attraction of the night on Disco Inferno was Mr. Dirtybird himself, Claude Vonstroke. My goodness, what a set this man laid down for Imagine on day 3. It was a magnificent sight to see the fans spilling over to Disco Inferno after the whole festival shutdown following the Above & Beyond set at the main stage. I looked up and saw a sea of people making their way to Disco Inferno as Claude was playing his set, and was amazed at the amount of people who stayed to see him close out the festival. There must have been about 5k Imaginers crammed into that small grassy area that made up the Disco Inferno stage, including the grandstands of AMS. Claude’s set was absolutely insane! He played some classic Dirtybird hits along with some other dance floor romping house tunes. I couldn’t have thought up a better way to close out Imagine Festival than having the Dirtybird headmaster delivering some booty shaking music.

Aside from a few mishaps and long wait times to get into the festival, I believe that Imagine Music Festival took the obstacles from 2016 in stride and gave us a wonderful festival to remember. This was a night and day comparison from their first installment as a 3-day camping festival at a new venue. The atmosphere, vibes, amenities, and overall aura of the festival were nothing short of amazing at IMF. The music was just icing on the cake to what Imagine had to offer for its 2017 edition. After witnessing the turnaround Imagine has been able to make for this year, we are totally pumped for what is in store for Imagine Music Festival in 2018 and years to come. We are proud of the hard work that Iris Presents and the others involved have put in to bring us a festival that can easily be considered one of the top-tier music festivals of the southeastern region of the country. Well done, Imagine! We will definitely be seeing you next year.

Top 10 EDM/Rap Collaborations Of All Time