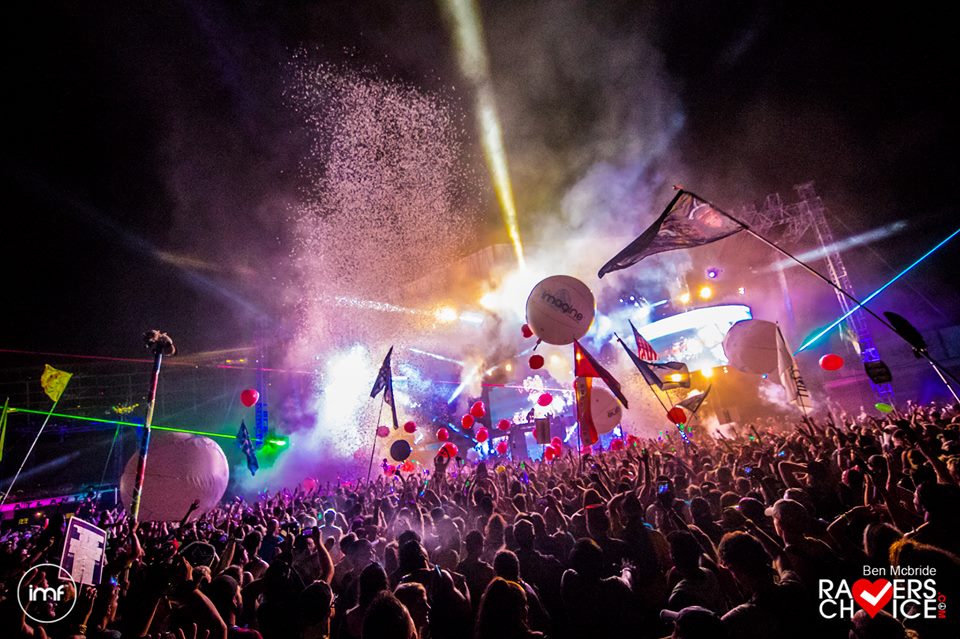 Summer of 2016 has come to a close, Labor Day weekend is now upon us and I am sitting here in my office still reminiscing on what exactly happened last weekend. My skin is continuing to peel and I have yet to return to my regular sleep patterns (which is typically at an unhealthy level to begin with). No, I don’t have TomorrowWorld to talk about, and Counterpoint has become something seemingly a thing of the past, swept under the rug… for the time being, at least. Ah, yes! Imagine Music Festival has come back to bring me some great tunes and create wonderful memories to cap of yet another hot and humid summer in the city of Atlanta. This year’s IMF was a little different from the last two when it was nestled in the nook of the old historic fourth ward on the Atlanta beltline in downtown. The folks at Iris Presents took a great leap of faith and made one of the biggest expansions of their lives with adding a third day, more artists, and camping to the ticket. For many months after the announcement of the big upgrade, I had some thoughts that loomed in my mind- “How are they going to do this without failing?” “With TomorrowWorld not returning for 2016, will this festival be a decent rebound after losing our beloved like a bad breakup?” These questions were certainly put to the test last weekend. Now, I’m not going to sit here and sugar coat by saying it was just absolutely peachy and went smoothly with no problems; because then I would be lying to you. With as much experience as I’ve had in this industry, I knew going in that there was going to be some hiccups for this first edition of the new expansion. Anyone who has a rational thinking brain would be capable of knowing this. I did not have high expectations, I just didn’t. But I was not going to let that get in the way of me enjoying three full days of music and making memories with thousands of others under the southern sky in Atlanta Motor Speedway. As I mentioned before, I will not say that the festival “exceeded expectations” or, for lack of a better phrase, blew me away with the looks and décor. But I am also not going to tell you that the festival was terrible or that I did not have a great experience. I understand the frustration with some of the guests who were not pleased with the aesthetics of the venue, I really do. That is something that the festival will truly need to improve on for 2017. The décor was a bit lacking, and the biggest complaint of all was the lack of water stations. Which, by the way, there were three water stations inside the venue, plus an army of vendors were walking around with ice chests full of refreshments for people to purchase. While the water stations were not exactly the easiest thing to find just by browsing the venue, they were certainly there. A good suggestion for the future would be to possibly have a large banner to mark off the water stations since that seemed to be an issue with most. But as for the food and beverage portion of the festival, kudos to those people; they did a fantastic job. The major takeaways from this festival that I think almost all of the people talking about it had forgot to mention were the production, sound, and performances. Isn’t that what we are all at a music festival for to begin with? Not this silly decoration and design nonsense that these mainstream music festivals have drummed into our heads over the past few years. The sound, lights, and lasers were nothing short of incredible all weekend. Not to mention the spectacular firework display that occurred each night which made the little 4th of July show we had in downtown Atlanta look like a cheap show put on in a neighborhood cul-de-sac. We got to see a debut performance from the infamous DJ Hanzel who has never played at a festival before. Dare I say, he definitely went von deeper! It was a one of a kind performance with his scrumptious blend of deeper sounds combined with those dance floor moving bass lines that you can’t resist shaking it to. With me being the house head that I am, my favorite sets from the weekend were none other than EDX, Thomas Jack, with an honorable mention of the bass-filled live performance of NERO. With a bass heavy lineup like Imagine had, nothing was going to stand in my way of getting down and dirty to some sexy 4 on the floor house tunes for a few hours on Saturday. Sure Imagine Music Festival had its problems. They had a few things that didn’t go as planned, and some people were not completely satisfied with their experience. I am here to tell you that I see where some people could be coming from, I can. The fact of the matter is the production and the music trumped absolutely everything negative in my eyes. Being the easily pleased melomaniac that I am, I found a way to have a fantastic time with some wonderful stage production, aesthetic tunes, and making memories with my festival fam. Was it as humid as a Florida swamp and hotter than hell over the weekend? You bet your sweet ass it was! It is the tail end of summer in GEORGIA. Any native will tell you that you will be immediately sweating and soaking your favorite festival outfit upon walking outside in this weather during late August, so don’t expect anything less. The same people who claimed to have such a bad time at imagine, well, we know exactly where they will be come this time in 2017… They will be coming back to this very festival as if none of the prior problems ever existed. IMF is growing into something bigger than you could ever, for the lack of a better word, imagine. This festival took a shot at becoming great and I truly believe that they will continue to improve; and I know the guys with Iris Presents have the same thoughts as well. I know that I will be returning to this festival, not only to show support to my hometown promoters, but to come back and have a fantastic time like I have for three years in a row. I think that Imagine will take this as a true learning process, and build off of their few mistakes to become one of the most premiere festivals in the south eastern region for many years to come. With a mind-blowing production and consistently stacked lineup they deliver each year, there is no reason why these guys cannot be chalked up as one of the top music festivals to attend every season. Until next year, Imagine!

If you would like to see more great photos of Imagine Music Festival 2016, check out our full album by clicking here!

Rita Ora News 2014: ‘I Will Never Let You Down’ Singer Explains Ex-Boyfriend Calvin...

Prepare Yourself, A Blink-182 x Chainsmokers Collab Is On The Way

Get the beat, electronic music style, at Tilt Music Festival in Bull City