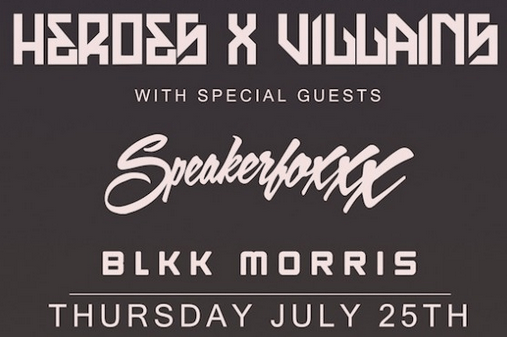 Heroes x Villains with girlfriend Speakerfoxxx had me so caught in the trap I had to chew my leg off just to get out.

Trap music began in the South–arguably in ATL itself–in the early 2000s. Well-known names like UGK, 3 6 Mafia and TI were some of the trailblazers for this genre to hit mainstream ears. Many EDM lovers may word-associate trap music with names like HxV, Carnage, Diplo, UZ and Flosstradamus (to name only a few). However, it’s important to know that trap music’s roots are with southern hip hop/rap music and didn’t give rise to EDM trap music until ~10 years later. [Wikipedia, “trap music”]

I was so excited to have the opportunity to talk with the Atlanta DJ couple at The Basement in East Atlanta last week during their show. I couldn’t wait to find out more about how music has brought them together, how they feel about living in the birthplace of trap music and what they were doing to prepare for Tomorrowworld to come to their hometown.

How long have you been DJing?
Daniel of HxV: Since I was 15 off and on. I started doing HxV 4 years ago.
Nilan: I started off doing music when I was 5 singing in the church choir. I also began playing the euchelele, flute, guitar, bass, and piano. I was in bands my whole life up until the age of 21. I got turn tables at 22. I’ve been DJing under the name Speakerfoxx for 4 years.

How big of a part does music play in your relationship?
Nilan: I would say we’re in a relationship with music as much as we are with each other. Music is definitely the third wheel.

Dance music is really known for it’s ability to make strangers become friends and to incite feelings of love and camaraderie within it’s community. Do you feel that has enhanced your relationship at all?
Daniel: Oh yeah. When I fell in love with her I made this mix tape for her.
Nilan: It’s my favorite mix tape ever made. Every time I listen to it I fall in love again. I knew before he told me he made it for me that he was thinking about me when he made it. It was one of the most special things. I could just hear it–I dunno–I just knew it was for me.

Was it some of her favorite songs? Stuff she hadn’t heard before? How did you tailor it for her?
Daniel: It was a little bit of all of that. It was more about an emotion and less about a specific song.
Nilan: I think sometimes music helps you express things in a way you can’t put words to and that’s what he did with this mix. He didn’t need to say anything, it was all just there.

What kind of new music can we expect to hear from you guys in the future?
Nilan: I just dropped a mix tape a couple weeks ago with New York designers Dee and Ricky. It’s part of a new series of mix tapes that I’m doing with designers that inspire me. You can find it on LiveMixTapes.com and on SoundCloud. I’m also working with Gangsta Boo (the first female rapper to join 3 6 Mafia) to co-produce her indie EP. 3 6 Mafia recently got back together and are recording another album. I’m Gansta Boo’s personal DJ so I’m sure that will open up some doors.
Daniel: We have another EP coming out on Ultra Records. We just did a remix of Ace Hood’s record’ “I Woke Up In A New Bugatti” that we put out for free. We recently remixed Knife Party’s “LRAD” that’s out for free. We also just did an official remix for Miley Cyrus’ “We Can’t Stop” record. We’re doing a collaborative project with Adidas for their 7v7 championship. We’ve done 3 so far, we have 2 more to do. We’re doing the next one with Flip, a graffiti writer from Brazil. The next one that actually comes out was done with Evan. It’s a video where they took our “Santuary” remix and played it over YouTube videos of people reacting to our songs.
Nilan: We’re also looking for places in Paris, France to take our music. We just visited and got really inspired there. We’d like to go over there for a year and just make music and DJ.

Where is your favorite place to play outside of ATL?
Nilan: I love playing at Lit in New York. Also the radio show that I play on, East Village Radio, in New York. I really like the vibe there. I’ve played a couple warehouse parties in LA and I LOVE warehouse parties. I’ve always loved an underground warehouse party.
Daniel: Paris is hands down–besides Atlanta–my favorite city. That’s why we’re trying to relocate there because it’s so inspirational. The crowd there is so responsive to American hip hop, trap music and EDM trap music. I’ve played sold out shows at the Nouveau Casino and it’s just been a really, really good crowd there every time. Also this spot in Austria called Flex that’s in like an old subway or something–it’s really sick. Such cool places in the world.

Since you guys have played all over the world, how would you compare the American scene vs. the European scene?
Daniel: The thing that stands out to me the most is the new rave revival that’s going on and how you see the rave culture coming back here in America. They have festivals over there but they’re not as rave oriented.
Nilan: I’m heavily influenced by hip hop so when I talk about EDM I’m talking about EDM trap, and I’ve noticed that across the sea they’re very into the same kind of stuff we’re into here in Atlanta, but that won’t necessarily translate to other cities. What we do here goes off very well there, but what works here and what works in Europe doesn’t always work in LA or Chicago. It’s actually what makes me feel like Paris or London is a home away from home.

You both are playing the inaugural year of Tomorrowworld. Is there anything special you’re doing to prepare for such a large scale performance? What are your thoughts in general?
Nilan: I’m very excited about it. I love all the people I’m playing with on the Fool’s Gold stage. I’m going to stay true to my brand, the southern hip hop vibe. I definitely plan on bringing a lot of that because we’re in my hometown.
Daniel: I’m also super excited. It’s an honor and I’m very grateful to even be on the line up. As far as what we’re planning on playing, it’s going to be a lot of our brand new stuff, a lot of our custom edits, a lot of our original music.

Chicago is known for and is very proud to be the birthplace of house music. Would you agree that ATL is synonymous with trap music like Chicago is with house music?
Daniel: Absolutely. Without a doubt it started here. Trap music–trap EDM music and trap rap music–are both in Atlanta’s lifeblood. It is a tempo and an attitude and a street vibe that came from Atlanta culture.
Nilan: It’s so much a part of our lifestyle that it takes going somewhere else and hearing how it’s no so prevalent to remind me it’s not everyone’s normal.

If there was any artist you could do a song with, dead or alive, who would it be?
Daniel: Otis Redding.
Nilan: Sid Vicious from the Sex Pistols.

I had such a great time speaking with Daniel and Nilan. You could really hear their love for music and for each other in their voices. Daniel made a point after the official interview was over to tell me that Speakerfoxxx was his muse for making music. Aww.

If you’re a fan of trap/hip hop music, you’ve got to come down to Atlanta and see these two play in their element. The crowd is super energetic and absolutely loves their hometown heroes. Any show I’ve attended in ATL, if a Heroes x Villains song is played everyone in the place is instantly energized to go extra hard. It’s truly like watching the King in his court.

Be sure to check out the SoundCloud pages of both Heroes x Villains and Speakerfoxxx. Also be sure to like them on Facebook to keep up with their new music and concert dates. Also, find and follow me, Sydney @ EDM Chicago, on SoundCloud for reposts that are nothing but certified bangers.