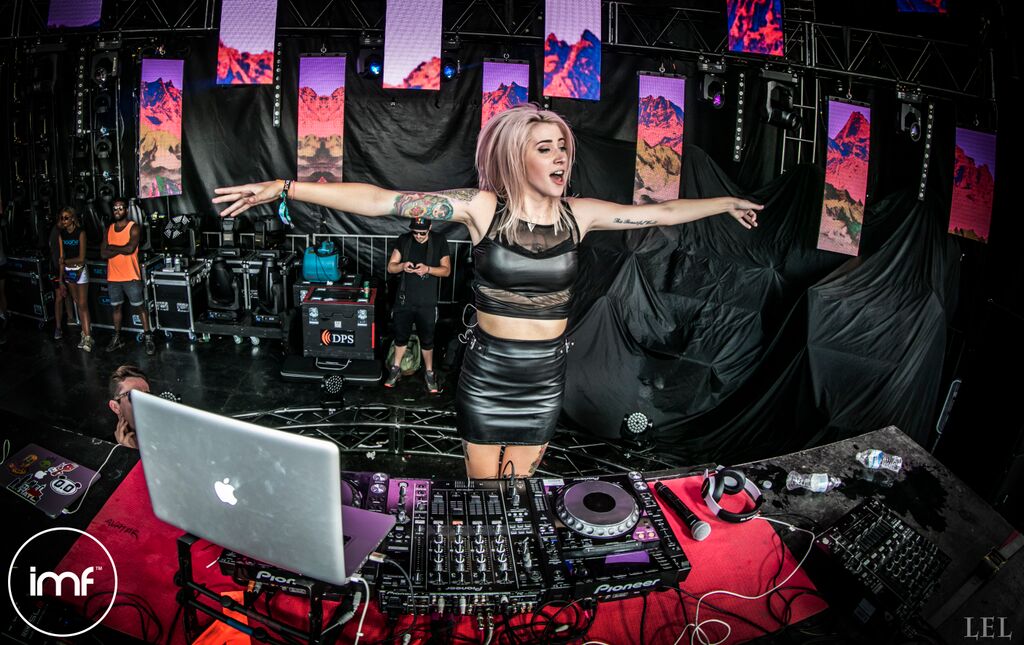 “I’ve never felt like I couldn’t do something. Maybe it’s the adrenaline.” A sip of Sprite, “It’s important to push your own limits,” she said. “You should always do the things that make you kind of nervous.” Too shy to introduce herself to the audience, for years Leah Culver of MK Ultra relied on Glenn Goodhand the owner of Iris Promotions in Atlanta, to announce her name when she would headline at Iris. Self-described as an introvert who taught herself how to be an extrovert, she said “It took me three years to get on the mic and yell ‘Hey! What’s up guys! My name is MK Ultra!’ I’d always hand the mic to Glenn, [until] one day he handed the mic right back to me.” Even now when Leah talks on the microphone during her concerts, her voice is deeper and more masculine than her natural talking voice. Leah’s speaking tone is slightly higher pitched at times, and soft but with a little bit of rasp in the upper register. Her voice is a mix of smoke and silk.

Recording as a featured artist on a track with Pyramid Scheme has opened up a new avenue for Leah to express herself musically to her fans. Singing has always been a large part of Leah’s life, but for various reasons, she kept that part of herself away from the public eye at first. Leah puts part of herself in each song she sings, and she does not enjoy revealing that side of herself to just anybody. Leah is what some would call a perfectionist. Revealing her vocal talents to the world has generated promising opportunities for Leah that she would never have earned if she was still just a DJ. One could say that DJ’ing as MK Ultra is now more part of her past than her future.

Originally, when the MK Ultra project began gaining traction in the social spheres of Atlanta’s EDM scene, Leah had no idea how far her DJ’ing career would progress. At a young age she knew that music was going to play a large part in her career as an adult, but originally she did not intend to become the female equivalent to Skrillex or Diplo; Leah just enjoyed finding new music and DJ’ing at clubs with her friends. In the back of her mind, becoming a singer, song writer was always the ultimate goal. Since then, Leah has become quite the talented music producer. Her hard work has earned her networking opportunities with multiple professionals in the industry, and she is constantly approached by big names in the industry who see her potential. One of the biggest examples of this is her collaboration with Trinidad James, the visionary behind the hit song “All Gold Everything.” Their song “Tantrum” was the first song that truly showcased how far Leah had progressed as a music producer, and it turned a lot of heads from nay-sayers who were convinced that she was little more than a musical puppet. It was around that time that she decided that her time as MK Ultra needed to come to evolve as it would have anyways.

“I picked MK Ultra because I could hide the fact that I was a female behind it,” she confessed. “It was important to me that I wasn’t out right seen as a female because I didn’t want to play a gimmick. I didn’t want them to know right off the bat that I was a girl. ” At one point she toyed with the idea of performing completely incognito with baggy clothing and a mask so as to make her gender an enigma. Looking back, the featured content on MK Ultra’s social media was definitely more masculine during 2011 when MK Ultra was just hitting Atlanta’s DJ scene. Her wardrobe relied heavily on jeans, flat-brim snapbacks, and graphic hip-hop tank tops. Her current apparel is much more feminine at times, a stark contrast by comparison. Accepting herself for who she really is has become self-evident to her audience, and her presence in the digital music community has grown almost overnight. In fact, now that Mark Zuckerberg purged all the fake accounts off of his servers, Facebook likes are more valuable than ever. Leah Culver’s Facebook page blew up over the past four years, and her artist page is nearing 50,000 followers. This boom in social media reach was generated with the help of Leah’s creative director and general manager, Valdano Terzic. His experience working for Illuminate, Liquified’s Friday night weekly at Opera nightclub, has proved invaluable for both of their careers. Since the two of them met at Iris last year, Val has helped transformed Leah’s career from local DJ to budding pop-star but don’t take it lightly that Leah and Val work the same hours next to each other all day working on all aspects of her marketing. Leah is very much fine-tuned in her business and how she wants things done. She is fast approaching a new echelon in her career as a musician. As she begins to step out of the underground and into the spotlight on a national or even global stage, she will face new hurdles that few DJ’s from Atlanta’s Inferno Lounge days have had the opportunity to attempt. Her future as still being shaped is very promising as many have taken notice.

One thing about Leah Culver that is certainly promising: she is a fantastic singer. “I feel I write a lot of things that are very fueled by heartache,” said Leah as she softly improvised on the piano. “I feel like I’ve been through a lot of just that, heart ache.” Her colorless fingernails passed over the keys as she sang impromptu lyrics about crashing waves of light. At times she would pause her playing and laugh to herself, a brief glimpse of a shy girl who is not used to singing in front of strangers. The more she played, the more she became engulfed by the soothing resonance of her own voice. Her face grew somber and poised; her eyes glazed over as she delved deeper into the recesses of her mind, pulling emotions to the surface and laying them bare before the camera. This was the real Leah Culver, her outer layers stripped away from the husk. “I love to sing. Since I could speak I’ve been singing. Since I could write I’ve been writing lyrics.” Becoming a DJ was more of a detour than a shortcut for Leah, but early on in life she discovered a passion for music. Born from a family of artists, Leah’s creativity was encouraged by her mother, an energetic woman full of positive energy and a desire to make others feel comfortable. As the youngest sibling of two musically talented older brothers—one a drummer and the other a DJ—Leah Culver was immersed in the world of live music during her youth. Her stepfather secretly told me that her mom can play the bagpipes! Contrastingly, Leah’s father can play the didgeridoo, and he even helped her pick out Leah’s DJ name, spurred from his affinity for conspiracy theories and spy craft.

“I feel like I’m a good balance between my mom and dad,” she said they raised me to be pretty evened out.” She starts all her sentences with ‘I feel’; any guidance counselor would be proud. “I feel pretty comfortable in my body. It’s been a process.” A systematic process, apparently. She recounted stories of time spent with her father, a survival expert trained in the art of remote viewing. He would perform remote viewing exercises with Leah while playing games with her as a child. Together, she would sit with him in public places, describing what she envisioned just beyond her periphery. Her father would ask her to count the number of people sitting in the table behind her without peaking; sessions that encouraged her to be aware of her surroundings by using extra sensory perception. When Leah got older she began reading social psychology books and adopting the attributes of successful people. She eventually took Dale Carnegie’s leadership classes, the author of “How to Win Friends and Influence People.” Leah’s tattoos and pink hair stuck out amongst the suited business men in the seminar, but she did not let it affect her attitude: positivity. She practically radiates positive energy, and her whole goal in life is to create light for others.

Leah does not recognize her star presence in the same way that her fans do. In her mind, Leah is just being Leah. The effect that she has on others is noteworthy, but she seemed surprised to learn that people experience an atmosphere of star power in her presence. Many have remarked that she looks and dresses like a famous person, and this atmosphere of fame that hovers around her can be enchanting. Recently, Leah and Andrew Levene of Stranger Candy went to Japan with Cali Da Kid and the Bass Bot to perform in Tokyo. When they arrived, everyone treated them like rock stars, open mouth gawking and taking pictures. People were coming up to take selfies with the group, but no one even knew who they were. Their entourage simply emanated stardom.

Separating herself from being known as MK Ultra may have been a smart move for the career path that Leah wishes to pursue from here on out, but so much about what makes Leah Culver the type of person she is stems from what MK Ultra truly is. Clearly there is a strong sense of connection with her father that has burrowed a soft spot in her heart for the nickname MK. Leah was raised to be an intelligent, intricate individual at such a young age that simply being in her presence can make one feel inspired to be a better, more positive human. It is for this reason that Leah is so dead-set on removing her attachment from her old DJ name. Plain and simple, the name MK Ultra stemming from {Project MK Ultra has a negative connotation attached to it simply due to the history behind the name far before Leah chose to use it. Project MK Ultra did harm to the world, and Leah is the total opposite of that. In her words, “I’m not leaving it, I’m evolving.” Leah Culver is so well established that people know her by first and last name, so it seems the transition from MK to LC is more rebirth than evolution. Leah’s decision to move forward as an electronic singing act that plays live instruments only feels natural to her. We are all very excited to see how these changes take shape and grow with the same great potential that is clear to see in her. Expect to hear more about Leah Culver very soon!

Who Are This Year’s Highest-Paid DJs?

Some Thoughts Of A Certain Sound: State Of The Union