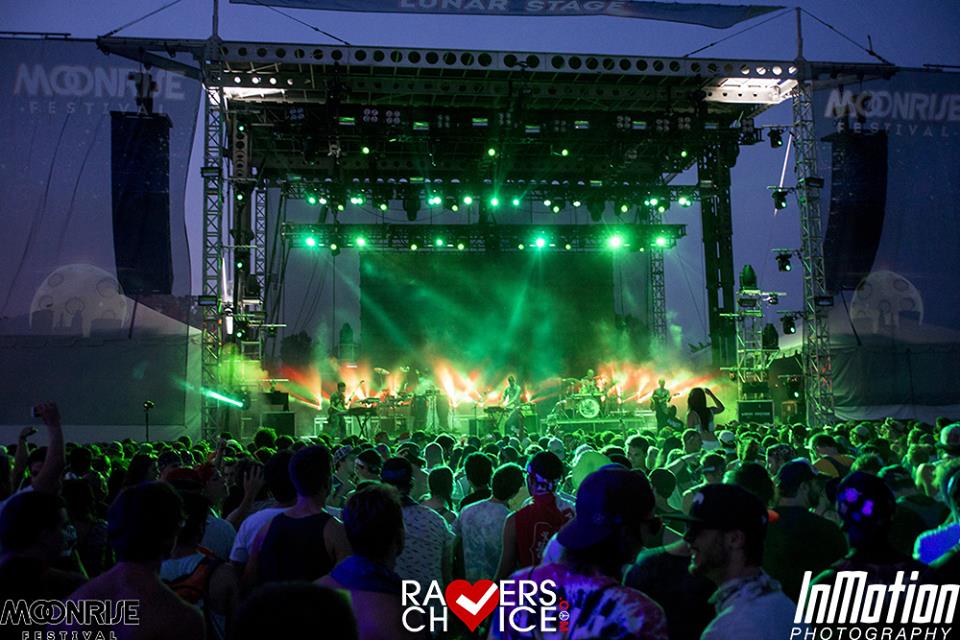 Just recently, Baltimore, Maryland was home to a two day music festival called Moonrise Music Festival. It was located just north of downtown Baltimore at the famous Pimlico Race Course. The line up was incredible, filled with artists of multiple genres of electronic music. Among the epic lineup of Moonrise was Lotus. Lotus is an electronic jam band out of Indiana. Their sound is unique and can be described as a mix of rock n’ roll mix with popular electronic beats. Similar to the sounds of Phish, The Grateful Dead, and STS9, Lotus has a wonderful mixture of those sounds that can be chill jamrock music at times; and then pick up the pace to a more upbeat electronic sound.

The vibes during their set at Moonrise were incredible. There is just something about their music that just puts you in a wonderful mood, especially their live performance. An interesting note about the aura during this set was that it seemed like there was two different atmospheres. People in the crowd towards the front were all getting down to their funky beats, while the people in the back were all swaying to the sounds or sitting on the ground relaxing to the music. People were hula-hooping, twirling, grooving together, and just all around having a great time. It was definitely an interesting transition of vibes from the rest of the day at Moonrise. For the most part, the music was mostly up beat and heavy bass until Lotus got on stage. The time slot that Lotus played during was also another good quality to add to their set. While they jammed away, the sun was slowly setting about halfway through their set. It just added that extra boost to the feel-good vibes of the band’s music.

One of my personal favorite moments during Lotus’s set was when they played a tribute to Deadmau5’s “Ghosts N’ Stuff” towards the end of the performance. I have never heard a jam band cover of that song, and honestly, I really enjoyed it. That was one of the coolest things about these guys. They were able to mix in an epic Deadmau5 tune and twist it into a funky sound.

I have never experienced Lotus live until Moonrise Music Festival. I’m glad that I can finally say that I did. Their music is fun to listen to at home, but their live performances are something that you need to experience for yourself. Overall, I truly enjoyed Lotus live at Moonrise. If you haven’t had the opportunity to see them live, I encourage you to go out and see these guys live. I can assure you that you will not regret that decision.