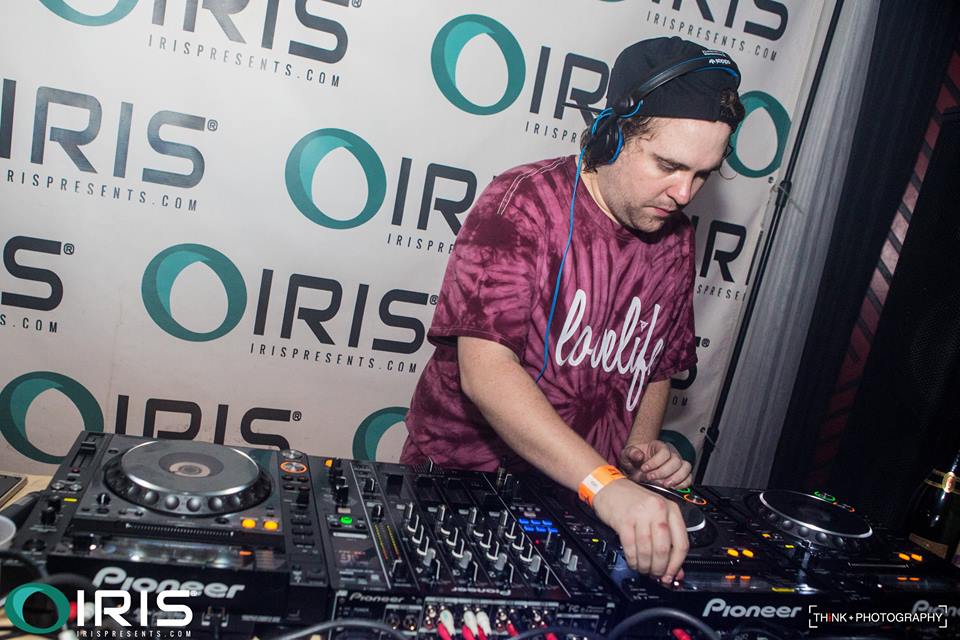 Sam Pool, aka Champagne Drip, is a electronic music producer from Los Angeles, California. For most of his producing career, Pool made drum n’ bass and dubstep under the name SPL. But for Sam, he was not one to remain a slave to his own genre. He wanted to branch out as something fresh and different. Over the last year, he developed this identity as Champagne Drip. Keeping it anonymous at first, Pool began to make waves within the dance music community with his new futuristic and melodic bass sound. Coining his style as, “drip-hop,” his music is a mixture of many different elements including hints of his old style as SPL, several different tropical sounds, and melodic bass. It is a style of music that can be enjoyed on the dance floor as well as chilling in a chair on the beach somewhere. After playing here in Atlanta at Iris, I got to spend a little time with Sam Pool and get to know him a little better.

Champagne Drip is a unique name. How did you come up with that?

About a year ago, I was working in this studio and I was in there after having a pretty crazy night before. That was also 6 months into writing music without a name, by the way. I just couldn’t come up with a name at the time. I was hungover as hell and lying on the floor in the studio and I said, “Just put me on a champagne drip.” I stopped and looked at my manager with that, “Ah-ha!” moment. I immediately Googled the name to see if anyone had that and nothing came up. So I bought the domain and registered the name on social media without hesitation.

Since you changed your identity, was it because you didn’t like to stick to one genre, or was it for another reason?

Musically I’ve always been sort or all over the place as far as electronic music goes. With music I just messed with everything. As SPL developed, the first tracks I put out were drum n’ bass and then after a few years I got into dubstep. I released my first dubstep tracks around 2008. Even that was really challenging. I got tons of flack for it too, and they all said I was “selling out”. That was confusing to me because I was enjoying that type of music before it really became a thing.

Why do you think drum n’ bass didn’t really blow up like dubstep did?

Skrillex is a good example for that. He really blew up and kind of took dubstep to another level. Dubstep pretty much changed everything since the dnb days. And to be honest, drum n’ bass never really had a “Skrillex”. Goldie would probably be that one guy for drum n’ bass that is well known. Or even Pendulum, maybe. But not that many people know those guys like they know Skrillex. So essentially, if drum n’ bass had that famous person for the genre then maybe it would be as big as dubstep in my opinion.

You think there is a reason behind that?

I think it’s just the way things are. Your average music fan isn’t really into music as much as maybe you or me. In general a lot of people really aren’t that into music. Some just have the radio and they know what they are exposed to, but they don’t truly dig any deeper than that. Like that’s satisfying for them and they have the few songs that they like and that’s it. Very few people actually make an attempt to truly explore music as a whole.

What was your transition from SPL to Champagne Drip like?

As SPL I was experimenting with different with different styles. I just felt myself getting musically further and further away from how I originally branded myself. Back then I really didn’t study the emotion in music other than making music dark. I was really into writing angst-driven, super heavy drum n’ bass. That’s how SPL was branded, and that’s what I became known for. Over about 10 years that became boring, and I wanted to branch out a little.

I needed to come up with something creative. I listened to a lot of Phil Collins, which is what inspired me the most with Champagne Drip. I wanted to reach into the past and include elements from when I was SPL and incorporate new sounds along with it.

Future bass seems to be an under the radar genre that is slowly building in popularity. But with that, there are a number of people who don’t enjoy it. Do you think it could be that music fans are lazy and they don’t truly know if they like it or not?

Honestly, it’s not a genre that I am personally attracted to. I’ve dug down into it, and explored it out of a need to make Champagne Drip fit into a context all while having other people’s music to DJ. I didn’t know that it was going to be “future bass” or whatever. I wanted to make music that had a mix of tropical elements, influences of jungle with reggae, as well as hints of my past with drum n’ bass and dubstep.

Why do you think music fans have this, sort of, love-hate relationship with future bass?

I can understand why people wouldn’t really get into it that much though. There’s a big contrast between commercial EDM and other genres with the raging party vibe, and the satisfying feel of all the builds and drops that EDM has. In contrast that can be sort of a let down for people who aren’t used to future bass style. If you’re expecting that kind of raging experience, it’s not going to provide that for you. If you played that like 20 years ago, though, it would probably be banging compared to other shit.

Let’s talk about your time as an anonymous producer with Champagne Drip. Did you reveal yourself because you were tired of keeping that act up, or was it for some other reason?

Well it got to the point where the conversation left the music and went to being people asking, “Who is this dude, and why is he anonymous?” It began to defeat the whole purpose of me being anonymous. I feel like a lot of music is like a gimmick and people need something to attach to it. So after a while, it really did seem sort of gimmicky. I know of a few people who are anonymous with producing, and one in particular actually doesn’t enjoy it. He ends up being just another face in the crowd when he’s not on stage. Which is cool, but some of the perks of the artist lifestyle is that fan appreciation. I would still be driven to make music, but I would be lying if I said that I didn’t enjoy the appreciation from the fans. So if you remain hidden, you end up missing out on some of that enjoyment.

Wasn’t it entertaining to see the blogs try and pin who Champagne Drip was?

Yeah, it was great! A lot of people tried to say that it was Diplo which was funny. I was surprised that no one was really able to guess that SPL was behind it. It shocked me because I even had a few slip ups here and there and I thought that people would find out but didn’t.

I noticed something when you played that show at Iris recently. You seemed to be friends with a lot of those people there at the show. Is Atlanta one of your top spots to travel to?

This was maybe my 3rd or 4th time this year in Atlanta which is pretty cool. I played as SPL, but I didn’t even play much drum n’ bass out here. Then Mayhem brought me to the Atlanta Dubstep at Graveyard. I met Ployd on the first gig and we ended up becoming good friends. I’ve just made a bunch of friends out here as I spent more time in Atlanta. I never just go for one night either, it’s always a few days just to enjoy my time in the city with people. I really do enjoy coming here and playing, especially for Iris since they are the ones who consistently book me.

Guess how MUCH money Calvin Harris made last year? OMG!