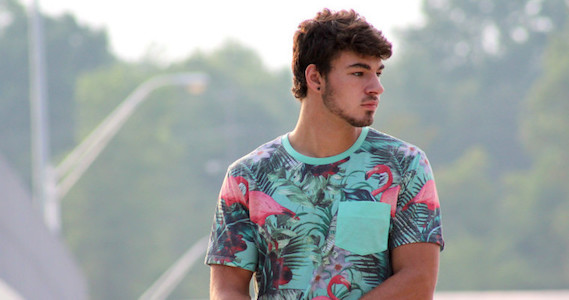 The journey to SMF Tampa continues as we are fast approaching Memorial Day weekend in just a few more weeks to go. Sunset Music festival will be hosting its annual two-day music festival. This highly anticipated lineup for Sunset Music Festival in Tampa, Florida is stacked with some of the most highly sought after artists for 2018. Among the list of talent are some standout artists whom you should know a little more about. One of those acts in particular for this segment is the young producer and DJ, Crankdat.

Crankdat, otherwise known as Christian Smith is a 21 year-old producer from Cleveland, OH. The young producer has been making some big moves in dance music over the past couple of years. Once a division 1 track and field athlete at Kent State in Ohio, Smith was also producing music in his spare time as a student athlete. He soon decided to focus more time on his producing career than his sports career.

Crankdat is a well-rounded producer, and certainly has quite the catalogue of styles in his work as an artist. Crankdat’s initially broke into the scene by writing some remixes. One that gained the most attention early on was his remix of Fetty Wap’s “Trap Queen” in 2015. It quickly received millions of plays on SoundCloud, which that number has skyrocketed to a whopping 51 million currently.

Through the early stages of his official releases, Crankdat added his unique twist on several well-known names in the dance music industry including remixes of Skrillex & Wiwek “Killa,” San Holo’s massive hit “Light”, and Coolights and Graves, “Say Things.” Crankdat’s edit on “Say Things” has received a ton of attention across the festival circuit. Most of the early work of Crankdat still earns support from many DJ’s in the EDM industry, especially his edit of that Coolights and Graves track. We’ve included these tracks for your listening pleasure below, plus a few extras to enjoy as well.

Crankdat had been releasing consistently impressive remixes early, but his fans were eager to hear an original from the producer. During the summer of 2017, Crankdat finally released his debut single, “Dollars”. The future bass track embodied that unique style Crankdat displays in all of his productions. He uses elements of hip-hop and trap with some creative synth melodies that are really festival-friendly, which explains why his remixes and originals receive so much attention from DJ’s across the world.

Over the last 6 months, Crankdat has released a couple more original singles to beef up his repertoire. His catchy track, “Reasons To Run” is a more upbeat and bouncy melodic tune that has racked up over 400,000 plays on his official SoundCloud page. For the dubstep lovers, his track “Need You” is definitely catered towards the head bangers.

For those who are attending Sunset Music Festival 2018 in Tampa this Memorial Day weekend, Crankdat will be performing at the Eclipse stage on Sunday, May 27th from 7:00-8:00. If you are a fan of all forms of bass music like trap, dubstep, future bass, and even bass house, Crankdat should definitely be on your list of artists to see while attending SFM ’18. If you haven’t already purchased your tickets to SMF, you can do so by visiting SMFTampa.com for details on GA and VIP passes.