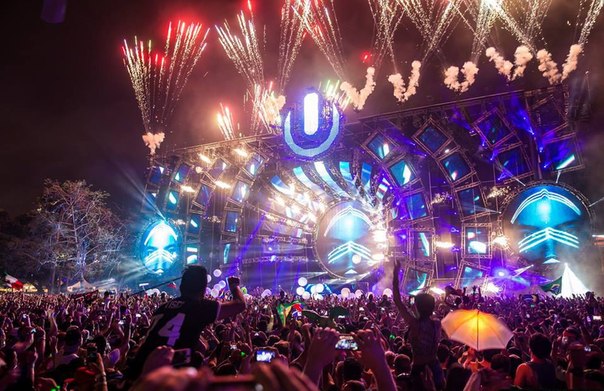 Ultra Music Festival in Miami closed with a bang Sunday night. However, the festival started off on the wrong foot on Friday evening. On the opening day of the festival, a security guard was trampled by fence jumpers who did not have tickets. As of Sunday, she was still in critical condition with serious injuries with slow improvement. The Miami Herald reports Erica Mack, 28, was hospitalized Friday night after fans without tickets broke through a section of the fence guarding the festival grounds and trampled her to the ground. Miami’s Mayor, Tomas Regalado wants Ultra Music Festival to go elsewhere for next year. He believes that a human life is worth more than the money the festival brings to his city. Fence jumpers pushed a section of weak fence over, causing it to fall on Mack and trapping her underneath it while they stampeded on top of her. Miami authorities stated that she suffered major head injuries and a broken leg from the mad dash of people jumping the fence. As of Sunday, Regalado said that Mack was now breathing on her own, but still disoriented and confused. Mayor Regalado puts blame on the festival organizers for failure to properly secure the venue. He is not alone in this opinion of the festival’s negligence, as many city officials agree wit the Mayor.

NO FUCKING MUSIC FESTVAL IS WORTH TRAMPLING AN INNOCENT WOMAN TRYING TO DO HER JOB. pic.twitter.com/HByrJBo82Z During a news conference in Miami on Monday, Miami police chief Manuel Orosa stated that Ultra organizers could possibly face criminal charges for this mishap. The festival was surrounded by a strong eight-foot tall fence. However, where the food and drinks were brought in for the vendors, there was a small chain-link fence. Orosa claims, “We brought this to the attention of Ultra personnel,” Orosa said. “We told them to fix it. Their fix was a double chainlink fence.” This was a definite weakness and the people who did not have tickets saw this as an opportunity to get into the festival by jumping over the much shorter fencing.

The City of Miami Comissioner, Marc Sarnoff also believes that this situation could have been avoided. He told the Miami Herald, “They tried to get into the front gate last year and we had enough security from the City of Miami Police Department.” He also had the same opinion as Orosa and Regalado for the festival to ‘Never come back again.’

Could this mean that the famed Ultra Music Festival could be making a move for next year’s show in the U.S.? As of today, Ultra Music Festival’s website claims that the festival will return as scheduled in 2015 to Miami. Although Miami Officials and Mayor Regalado, have a different motive and they are working hard to make sure the festival does not come back to their city for good. As the saying goes, “It will be interesting to see how it all plays out.” Maybe there will be a new home for Ultra in 2015.