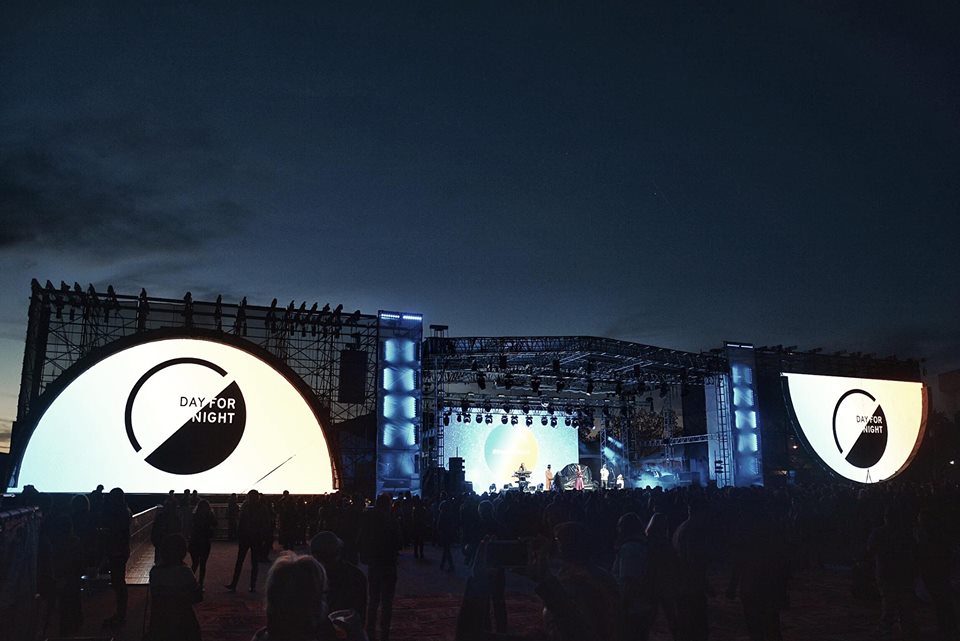 As 2015 comes to a close, Houston kicked off the Pre-Christmas festivities with Day for Night Fest by Free Press! Day for Night is a two day art and music festival with a variety of world class musicians as well as leaders in various disciplines of digital art. The event took place on December 19-20, 2015 in Houston’s Silver Street Studios. Silver Street is an arts and event complex that includes 20,000 square foot event space and 70 creative studios; a perfect place for the digital art installations making the experience very unique and entertaining. Free Press is well-known for hosting their Free Press Summer Fest in Houston during the hottest days of the summer. The winter sister of FPSF, Day for Night Fest, was first announced in early October. After a disappointing Something Wicked, Houston had a chance to redeem itself with good weather for Day for Night. Normally festival goers wouldn’t be too worried about the weather for any outdoor winter festival, but not in the Deep South! Lucky for us Texans, December has been feeling pretty mild this year. You could even get by with a light jacket.

The venue was very spacious, nestled within the quaint local neighborhoods. Although, It wasn’t difficult to find parking in the surrounding neighborhoods. With the way everything was set up, it felt more like a large art installation with a music festival within it instead of vice versa. Day for Night really immerses the festival goers into another world filled with light and creativity. It felt like the entire festival was putting you in a trance-like hypnosis and meditation. Inside the main exhibition hall, visual artists displayed their site-specific installations using light, sound, 3D rendering, and projections to create 20ft. tall interactive pieces. The main stage, Red Stage, was beautifully created with the simplicity of half circles on each side of the stage in opposite directions. They represent the day and the night. Nothing makes me happier than geometrical shapes. Kamil Nawearthil’s projection of tiny globules undergoing mitosis was magical and vibrant in color. The marquee installation was truly the talk of the town. Created by Nonotak Studio, VOLUME, was an enormous square grid of metal beams interlocked with each other across a warehouse the length of a football field. A series of sharp percussions and deep bass created a light show that was both dizzying and mesmerizing. In one moment, it felt like time stood still. Then the next would move very quickly.

Saturday was a calming day; ending with New Order’s only US live show and their return to Texas since 1989. New Order was silhouetted against a kaleidoscopic array of graphics and visual effects that enhanced the live set to the nth degree. After New Order’s set ended, thousands of people were still lost in their own world as they continued to relax and enjoy the groovy, carpeted dance floor.

Sunday rolled around with even warmer winds and cloudy skies. I revisited my favorite art installations and enjoyed the lights again before I hopped over to the Green Stage which was nestled inside a repurposed warehouse. The noise bounced off the walls and in pitch darkness, as the graphics danced on the warehouse walls. Dillon Francis controlled the entire warehouse; opening his set with some bells to set the holiday mood before exploding into a heavy hitting bass remix of, “When We Were Young”. The night was filled funny graphics, moombahton tracks, and head banging fans. Dillon even dropped his flipped version of Skrillex’s remix, “Red Lips”. I left the stuffy warehouse, and was met with a cool Texas breeze which was immediately refreshing. Kendrick Lamar blew away the crowd with a relaxed, acoustic set of his hits. His words transfixed the crowd to a state of awe. “M.A.D.D. City” was beautifully done but the showstopper was when he performed “Bitch, Don’t Kill My Vibe”. Lamar even invited up a few fans from the crowd to rap the lyrics live on stage. The first contender was too good to be true. He was perfect, a fitting image of a crunk white man who was living the dream on stage. His rhythm and melody flowed very well as he freestyle rapped the entire time. It was so good that it felt like it was a planned part of the act. This unscripted cameo from this Houstonian made him a hometown hero.

Overall, Free Press took a risk for a winter festival and succeeded. The weather played along for the weekend and the stages were just magnificent. All in all, it was a very chill festival; a laidback twin of Free Press Summer Fest. Day for Night really appealed to the inner artist in me, and I certainly believe that it was a festival that nobody saw coming.