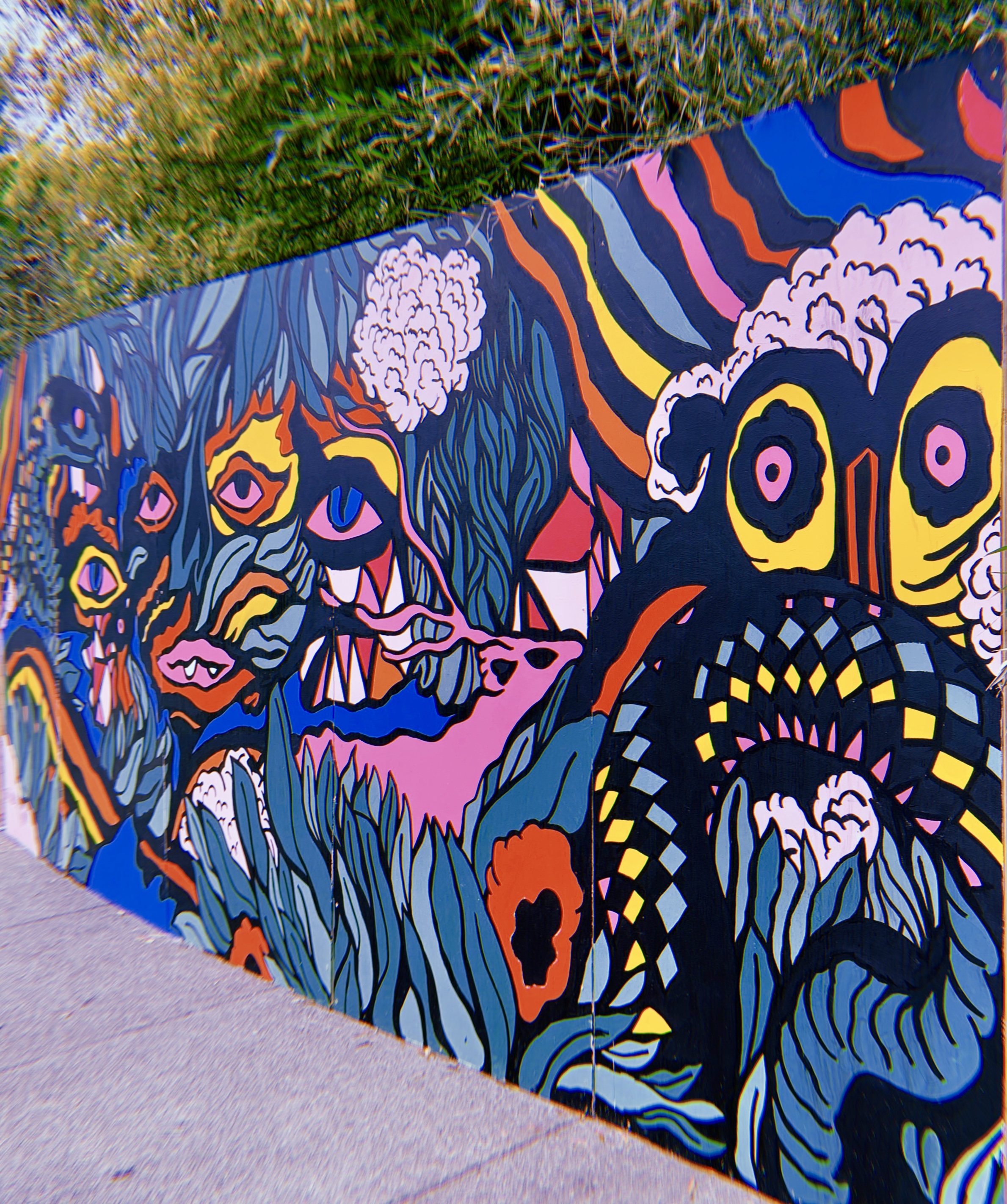 Collaboration – Regeneration – Acceleration
Those three words are what come to mind when trying to explain the message that I received from my time at Deep Tropics.

It isn’t very often that we get to venture to places that allow us to be completely immersed in a new environment where we have very little worries. Raverschoice.com was looking for a kick-ass party and some rejuvenation, and we found both. Deep Tropics created an environment where we can grow, and have a great time doing it.

The immediate aspect that stood out about the festival was its focus on style and sustainability and how they incorporated that into the design. Not only is the name Deep Tropics sexy, but the art that surrounded it was vicious.  Aaron Martin, the creative director of the fest interviewed with us and shared how he created his illustrative jungle. (Click HERE for the FULL audio interview!) He volunteered to work, which is rare for him, and was so pleased with how the vibrant installments came out. He explained that his proudest moment was finishing the design for the main stage and seeing it come to life. He is also currently developing some pieces for the artists that were on this year’s line-up. His best advice was to remember how important it is to sustain your environment, as well as your health.

The main stage set up was the most memorable part of the weekend for me. I go to plenty of festivals, and it is rare that you can stand anywhere, and I mean anywhere, and have a perfect view! The set up allowed every person there to feel the sound blasting through their soul, and I was able to have an experience where I felt like my favorite artists were performing just for me. Luckily, I would look up and see hundreds of others with just as big of a smile on their face. The other sound stages, like the WaveClub, brought unique designs and bass sounds to give us our underground fix. I even met some amazing up and coming producers that were testing out their new sounds deep within the trees.

Walking in on Day 1, I was immediately led to the healing village, which was filled with ways that we all can build a more sustainable lifestyle and re-use our products. From goat permaculture,(yes, there were real goats there), lessons on how to make hemp products and expert level face painting, to talk backs on internal healing and erotic intelligence, it was an adult playground. There was jewelry and art that you can’t find anywhere else, so of course I had to purchase a few items. I eventually found myself at the Tranquil Temple. There, we could put on headphones silent disco – style, and join a group meditation and dance at any time of the festival. When I went, the music reverted me to a villa in Spain, and I made a friend who felt the same, and we danced, did yoga, and meditated together, before going to the MainStage to rage. Is this heaven? Beforehand, I was truly wondering how clean and efficient the festival would actually be since this year, there was a larger focus on sustainability. Well, unsurprisingly, they nailed it. Not only did their re-usuable cup process decrease the amount of waste scattered on the festival grounds, but even the ones left on the ground were picked up by strangers, since they could be returned for money (3$ each), or saved as a souvenir. They had compost and recycling bins placed everywhere in a cute fashion and they even called the crew and volunteers, “Earth Guardians”. That really resonated with me because this is our home and we should care for it as such.

Now let’s get to the music. The fact that there were no conflicts was GOLDEN, and it left out the underlying anxiety we feel at fests when trying to decide between conflicting artists. It was an honor getting to experience the O.G that is AMTRAC. His daytime performance was really who set the high energy mood and vibes for the artists to follow. He is so likable, I would love to sit down and have conversation with him.

Via the attendees I interviewed with, the most anticipated set of the weekend was Bonobo, because he never really ventures over to this part of the US to perform. He did NOT disappoint. I love getting to hear such exotic music that sends me to other places. But it was Cashmere Cat that truly took the win for me on Saturday. I never expected that etherial bass sound to come from such an adorable human being. Everyone around me in the crowd clearly felt the same, as we all seemed to be on this beautiful roller coaster ride together. Other standouts for Saturday were Walker & Royce, and of course Keys N Krates. They played a completely different live set than I am used to. Watching them flow together, each individually playing their instruments at the tropics, was a pleasure. I was low-key sad that they didn’t bust out any of their old top hits. So, I decided to go to the Keys N Krates/Hex Cougar after party at The Cowan. That is where I got my oldie, but goodie fix. They killed it. Party was so lit.

Day 2 was a bit rainy, but that didn’t stop anyone from having the best time possible. Channel Tres was one of the most unique acts of the day. He and the two amazing male dancers brought a meaningful and rhythmic choreography that is totally memorable and uplifting. If you haven’t heard of them before, you will now. Right as Mija began, so did the rain. Of course her talented self was able to incorporate a ton of rain themed music into her set. None of us seemed to care, after all, we are in the rain forest (; The wild ride of the weekend: WhatSoNot into Rick Ross into Troyboi. Like WHAT. I was front and center, and I am truly still in shock that I got to see these amazing sets in such an amazing location, not to mention the amount of BANGERS they played. I will argue and say that I had the best seat in the house. (I know everyone will also argue that about their seats.) The coolest thing about a festival though, is that it brings humans together. The people that attended this festival are a large part of why I will attend next year. Every person there was so lovely, inside and out. Everyone’s festival style shined through because you can tell that they are a light even without the outfit (: I found my sense of self through this music therapy, and it was just a reminder of how beautiful life can be. I left wanting to be a better human overall.
“This is such a great festival, so remember to pick up your trash, spread the love, and keep the vibe going for what Deep Tropics is trying to promote here. That’s the most important part, it’s all about one small step towards the right direction.” – Waterchild, during his DJ set at the tranquil temple.

Deep Tropics music, art and style Festival didn’t just come to play. They came to throw a great party, and an opportunity for you to heal. This environment allowed us to flourish.
A festival held in the great music city of Nashville has a large cup to fill, and the Deep Tropics cup is overflowing, rightfully so.

Until next year, Thank you Deep Tropics.      The festival depression is real.

10 minutes with Adventure Club @ IleSoniq 2014, including a love letter to The...

Rita Ora inspires another famous ex to go off on one on Twitter after...