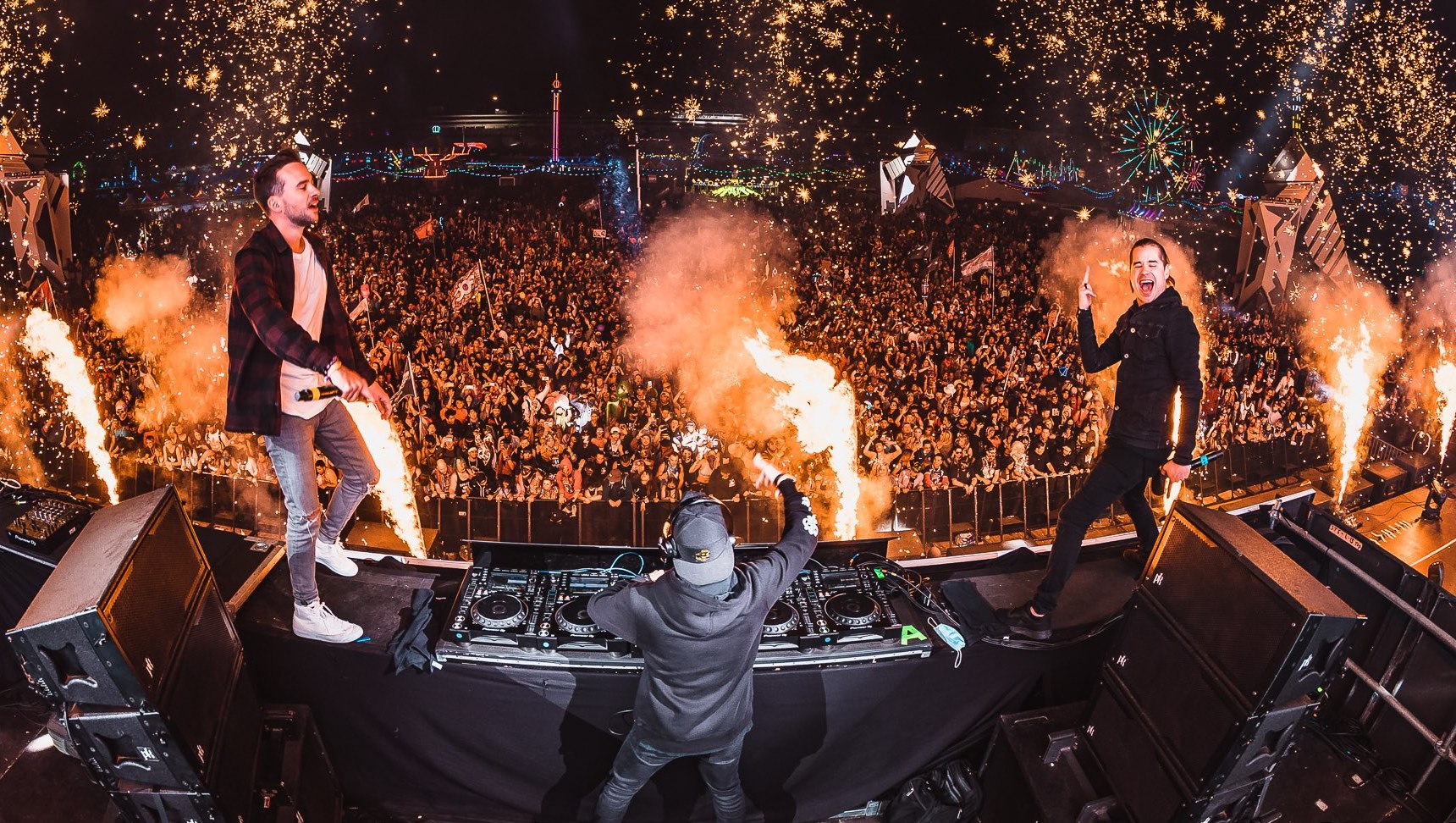 (Atlanta, GA)— The French DJ duo Dirtyphonics debuted with their iconic “French F**k” track back in 2008, and their ferocious sound quickly helped them gain a spot under the sun along with a HUGE international fan base. This versatile duo is known for skillfully mixing neck breaking dubstep tunes and gory metal sounds. From grimy dubstep to fast paced drum step to intense neo metal, these guys sure know how to turn up the crowd. Ravers Choice got a chance to sit down and chat with the legendary Disciple duo after their big show in Atlanta at Believe Music Hall. In this interview, Charly and Pitchin (aka Dirtyphonics) share with us their thoughts on Djent (think progressive metal) and EDM, their inspirations, and popular music trends.

So let’s start off with the basics, tell us a little bit about who you guys are and what you do.

We are Charly and Pitchin usually known as Dirtyphonics. We’re both French and I guess you could say we write heavy music and have been touring the world for many years now.

How did you guys get in to producing and DJing?

Music has always been part of our lives. We started pretty young and played in homies metal bands when we were teenagers and slowly evolved toward electronic music. Back then in Paris there was a real explosion in the electronic scene and it was all new and unexplored territories. In those days only a few record stores would have the brand new stuff coming from the UK, France, the US and you’d meet all the other DJs and producers in your town. There was no money in the industry so you knew that all the kids you’d talk to were there because of a common passion: underground music.

The Prodigy, The Chemical Brothers, Daft Punk, Laurent Garnier, Dillinja, Pendulum to name a few. Now the scene is so thriving that there’s a new dude doing something dope every other week! We listen to a lot of different genres and get ideas from many different sources.

As a group that I consider to be pioneers in combining the aggressive ferocity of metal with electronic music, do you see sound design in bass music influencing metal producers?

Obviously! A lot of the current Djent bands use electronic elements in their music and Bass Music sound design is influencing all genres anyways. Genre borders are more fluid than before and metal and Bass Music definitively have a common energy. Lots of Dubstep producers have a metal background and it shows in their music.

What do you think it is that makes these two genres meld so easily?

As we said it’s all about the energy and grit. It’s the best energy release you can find. It’s a big middle finger to the negative energies around you.

Are there any artists outside of electronic music you would love to collaborate with?

Lots! Obviously some metal bands like Kadinja, Godjira but also anyone who’s creative and brings something fresh to the table.

With drum and bass seeming to be trending upwards at the more and more, what are some trends you’ve seen come and go that you like, and what’s the one you wish would go away?

Trends all have their supporters and everything has a cycle of popularity. What is dope now won’t be anymore in 3 years from now and what used to be cool will make a come back a way or another. It doesn’t really matter at the end of the day – movement is healthy and it keeps things evolving.
One thing that would be cool though is to actually be able to understand what the rappers say again.

Are reactions to certain tracks different in different countries?
Our shows are energy driven, and it’s a universal thing! 🙂

Is there a country you guys have played in that surprised you with their energy?

Not trying to brag here but France goes HARD! Japan has been surprising in the sense that 10 years ago they had no idea what dubstep was and how the scene was overseas and now they all know and sing along the bass lines of the brand new VIPs. They went from clapping in the breakdowns as if the song was over to cracking their necks like there’s no tomorrow.

We just released “Evil Inside” with Bossfight on Monstercat and we have another secret single coming out before the end of 2019. We’re also finishing the year with a quick Europe tour followed by our biggest tour do date in Oceania. After that we’re going to be focusing on our new LIVE show and give it an update before Rampage: new visuals and new music! After an insane amount of love we got on it we’re super excited to take it to the next level and keep developing our vision. We also are talking about bringing the LIIVE to North America in 2020…

Meet the Man Who’s About to Save EDM From Itself

Made in America continues to draw crowds