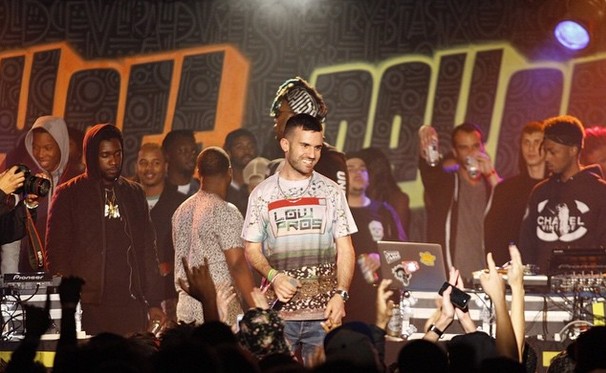 If you live in Atlanta and you don’t like rap you probably have a hard time finding people that relate. Atlanta is the center of the hip hop universe. Fool’s Gold catered to the city and the crowd and every set leaned towards hip hop rather than EDM. The Fool’s Gold Day Off headliners Low Pros, comprised of A-Trak and Lex Luger, formed here about a year ago and that helped make this lineup special for Atlanta. That led to a sold out crowd on Masquerade’s top floor, Heaven. Atlanta Native OG Maco came on earlier in the night and rapped a solid version of “U Guessed it.” It let you know that the rappers here are talented. Plenty of rappers sound terrible live but apparently A-Trak doesn’t invite them. Since this was Atlanta the lineup was hometown heavy so you also got to see Heroes x Villains and Que.  Que is best known for the song “OG Bobby Johnson” which got popular when Lebron tweeted about it around a year ago. Que’s set impressed but after this point so many rappers came on stage that the sets started to blend together. By the time Travis Scott or Danny Brown got on stage there were probably 40 people up their with them and the line between the stage and the crowd got a little blurry. The crowd was full of people that knew every lyric so during main verses you heard the crowd echo Danny Brown or Travis Scott. In my experience with concerts in Atlanta crowd involvement is high whether its an EDM show and you see everyone dance or just how often you hear “ATL Ho!” This translates to a great rap show as well, hearing the entire crowd flow makes the experience worth the price of admission. If you didn’t make the show then check out the Soundcloud mix below and hit the down arrow towards the right of the track for a free download.

Talking with Matt Adell, Part One