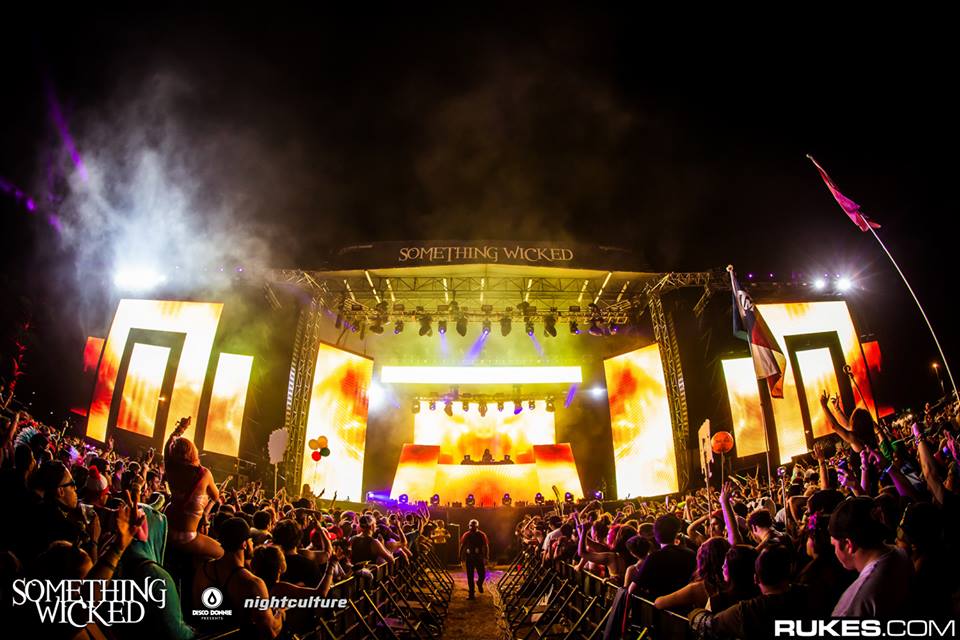 On the weekend prior to Halloween 2014, thousands of ghoulish creatures donned their scariest garb and descended upon the city of Houston last weekend for the annual Something Wicked music festival. With a stacked lineup including the likes of Bassnectar, Martin Garrix, Kaskade, and Dillon Francis, there was no shortage of musical variety for all to enjoy. The lineup, vibes, and people were all definitely something wicked to talk about.

This 2-day Halloween celebration was oozing with spectacle as elaborate pyrotechnics and colorful beams of lasers captivated the eyes of all who dared to watch. Enormous stage structures such as a moving 20 foot skeleton, and cable flying witches skimming above the heads of festivalgoers were among the more memorable scenes etched on everyone’s minds. Since it was a Halloween themed festival, there was a plethora of amazing costumes in the massive sea of people that attended. From a crew of Where’s Waldo themed friends, to an evil looking Jigsaw doll from the Saw movies, and even a life sized realistic tyrannosaurus rex were among those found roaming these haunted grounds. Wicked costumes and even more wicked music were the dominating theme for both fright-filled nights.

The most highly anticipated sets appeared to be from Kaskade and Martin Garrix and according to the crowd energy, neither of these men disappointed. Kaskade delighted everyone’s ears with groovy remixes of fan favorites such as “Atmosphere” and “Eyes” while pleasing the eyesight with bright, breathtaking fireworks to round off a truly magical closing set. Martin Garrix released high-octane energy at his set with heavy beats and fast-paced rhythms to match. With favorites like “Animals” and “Wizard” spinning, there was no such thing as chill and sweet in this pumped up crowd. Drinks, clothing, and other random objects were spotted being launched into the air with every beat drop as the crowds erupted into cheers and smiles. Honorable mentions for some stand out  sets were Borgore, Bro Safari, Deorro, and Flosstradamus.

Most importantly, all artists at this festival were amazing in their own ways and a pleasure to experience. There was no such thing as an empty stage anywhere and the love from Houston was definitely felt everywhere. Overall, the festival was a great success from the enormous line up, to the amazing production, and to the always wonderful attendees with their incredible costumes and vibes. Both days were equally fun for all, and made for great Halloween weekend full of music and excitement.

MTV Announces It Will Broadcast Tomorrowland

The 9 Sexiest DJs On The Planet