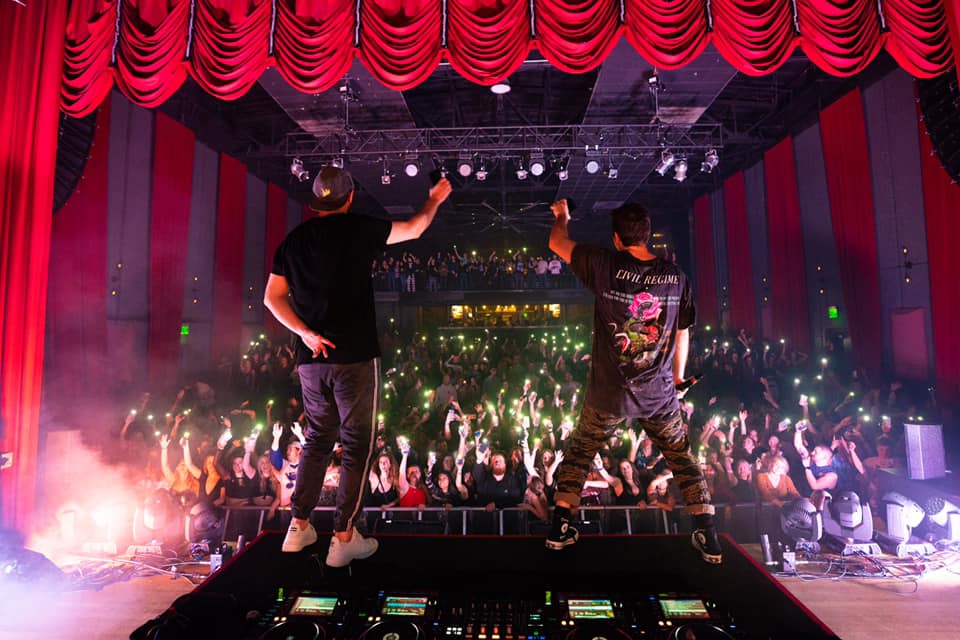 (Atlanta, GA)– When meeting an artist for the first time, you’re never really too sure what to expect; so it’s incredibly welcoming to be greeted by two friendly faces offering that pure Los Angeles-style comfort and conversation. These guys are Two Friends. This humble electronic duo from LA is all about working hard, playing hard, and simply having fun. Since they emerged in the scene, they’ve reached unbelievable heights. What started as a fun project in high school grew into an international phenomenon that quickly gained a dedicated fan base.

They created a buzz by remixing several all-time favorites like “Mr. Brightside” or “I Miss You” by Blink-182 to name a couple, and adding a few special elements to give it a totally unique sound. The original music catalogue of Two Friends just screams, “We are having fun, and so should you!” And that’s what I love about these guys. Their contagious and energetic vibe, which can really be felt in their “Big Booty Mix” series, makes you want to get up and lose yourself on the dance floor. It was a pleasure to have the opportunity to chat with Matt and Eli on the Camp Superdope Tour with Matoma before their set. The two shared with us how the project started, where they find inspiration to write their original tracks, and high praise for Swedish House Mafia.

RC:       We always start with the basics, tell us how did you guys meet each other and decided to become musicians?

Matt:             So we met each other in middle school in Los Angeles and kind of became friends there, but we weren’t doing music together or anything. I kind of played guitar and then in high school Eli kinda got into mashups and stuff. When we were graduating high school, we were like, oh, we’re not playing sports anymore, let’s learn to produce music. We didn’t even know what that meant, but we just bought a program right near the end of senior year and then we split off for college. But during college we were almost treating it like a full-time job. Then we started gaining momentum in college. So probably by junior year or something, we’re like, alright, let’s try this full-time when we graduate. And now it’s been four and a half years since we graduated, right?

Eli:             We literally, not a joke, went on Google and searched, what programs should we get to produce music? And it was like…

Matt:            I think if we could’ve gone back, we would have chosen Ableton; but now we’re trying to switch anyway, so it’s like we’ll see what happens. It’s hard to switch.

RC:             Okay. Who was/were the producers that you listened to at first that made you realize this is what we want to do?

Eli:                I think it was back in the day. Yeah, it was probably a lot of Avicii, Alesso, Swedish House Mafia. We grew up in LA, and Coachella was a big deal for our whole school, so we’d go. I think that was kind of the first introduction to going and seeing a lot of the DJs at Coachella and not even really understanding what it was or how it’s made or what the hell is happening.

Matt:               I think when we were first learning how to produce, we were kind of just copying, trying to figure out how to get that clean and nice sound. So I think in the beginning it was those Swedish guys, and I honestly think that’s probably the most common answer.

Eli:                But that was also the first stuff to really land big in the U.S. for the mainstream. Obviously, there’s so many other genres that have the roots here. Towards the end of high school, 2010-2011, Swedish house mafia is getting on the radio a lot, Alesso and Avicii are blowing up. I think for a lot of American kids at that time, this was what they were being introduced to.

Matt:           I feel like back then our influences were a lot more focused, and now it’s just kind of all over different genres. I mean, like dance music, pop, hip-hop, rock, just a little bit of everything. It’s honestly hard to reference one because it changes every month really.

RC:             Ever since you emerged in the scene, you’ve been unstoppable. What’s the most challenging thing that you guys had to deal with in these years?

Matt:            And also just having patience in general, because it’s really been a slow but steady grind. And I think that’s pretty normal, unless you have a huge radio hit or something. So patience, patience, and perseverance.

RC:           That’s awesome. For your original beautiful tracks like “Out of Love” and “Bandaid”, where do you find inspiration to create whether it’s EDM related or not?

Matt:           Yeah, both of those kind of have a foot in dance and a foot in pop. I think when we started those and a lot of stuff we’re making now, it’s just… ‘Do we like it or do we not?’ Like not so much thinking, ‘where does it lie?’ I guess we like pop and dance, so that’s kind of where it ends up going.

Eli:              I think we’ve gotten better about just going with it if there’s a cool idea and we are feeling good about it. You know that if you still get excited by it, it’s obviously a good sign. So for “Out of Love,” I know that one started with that guitar lick that’s still is in most of the songs. Matt just had a voice note where he’s playing that and then it’s like, you know what, we got to make a full song around this. Bandaid, I think was the lyric, we knew that tagline…

Matt:           Yeah, we had the chords and then just like the “bandaid ah, ah, ah!” *singing the tune* I’d say, nowadays, it’s usually a combination of a tiny instrumental idea with a vocal, or a hook, or something like that because we like to write a lot.

Eli:               I think the goal is also not to rush it, but basically keep going. No matter what, you’re going to get to a point where you just get a headache about the song. You’ve heard it too many times. You don’t know if it’s good anymore, you lose all your perspective. So that beginning part is very important, and if you are excited about it keep going as hard and as you can as fast… Again, don’t rush it, but go as fast as you can to use that inspiration and keep going because it will run out. So if you could get the meat of the song done, then you focus on the other parts.

Matt:            Usually if you have a lyric, it’s not necessarily a melody because you need help with the chorus behind it, or at least what tempo it is.

Eli:               There’s not a formula that we always follow. Each song can be a little different, so there’s definitely a good amount of our work where we had the title, and you think of this is a cool title for a song. If the song is called “Dollar menu,” alright, now we’ve got the title down. What’s it about? And then we start building off of it.

Matt:         The cool thing about songwriting and music is just the unlimited potential. You can go about it the song title first, you go about the idea, then you can go about the production. It’s just unlimited, and it really keeps things fresh when you’re making stuff.

RC:           Your set production seems very thoughtful and time consuming. Tell us about your process of finding out a track like… let’s say Blink-182’s “Say It ain’t so” that could mash up with Amy Winehouse’s “Rehab,” and flow perfectly into “Old Town Road?”

Eli:            Yeah, I mean, for the mixes, it kind of ends up being a lot of trial and error. It wasn’t necessarily that we thought those three or four songs you mentioned. It wasn’t like we had the idea all at once. Like, “Oh it’s gotta be this to this.”

Matt:         Honestly, in the beginning I think it’s more like mathematical and scientific. It’s just what key is this in, what is near this BPM? You know, just testing things.

Matt:         Once you hear something or if it’s close, a really good sounding thing might be worse than the coolest combination ever.

Eli:             I think the conceptual part of it is that there are certain ones that sound great, but they’re not very interesting?

Matt:          Because if no one knows the vocal, it’s just a cool song. But if it’s a nostalgic thing from the eighties over a dance drop from this year, it feels cooler. You know?

RC:         Sure sounds like you’re having fun doing it! Is there a specific track that you like to drop the most in your sets?

Matt:         Of ours? Probably the one that goes off is our “Mr. Brightside” remix. Just because people know the vocal and it’s just a fun one to play.

Matt:         Thank you. I appreciate it. There’s a lot more at this point and now our sets are getting pretty heavy towards edits from “Big Booties” mixes or our originals, or remixes with a couple of other things thrown in. The sets can get filled up quickly now, so it’s good. It’s been getting more Two Friends related over the years.

RC:           Awesome. Your mixes include an insane variety of hits from the early 2000s to EDM Classics, from Shakira to Illenium, and even some of the best vine quotes there are. But If you had to choose, What would you pick as your favorite vine quote, and your favorite throwback track?

Eli:              That’s always a fun part of throwing those in at the end. And then favorite throwback? I think it’s cool, the more unexpected, like mixing an Elton John track… there’s not a lot of dance remixes of those type of songs. So I always like when we’re able to figure out a way to put in the Beatles or Queen.

Matt:          It’s kind of interesting. I feel like a lot of our unreleased stuff is going towards the direction where it honestly has “a foot in dance,” and some of it is way more dance than others. But there’s rock in it. There’s pop in it. Eventually there will be country, no doubt. And theres some rap thrown in. So honestly pretty much hitting everything.

Matt:         We’ve got a lot of music. It’s hard to work on the road, but we’re grinding. We have stuff coming out soon. We’ll have another “Big Booty Mix ” to release probably by April. A lot of touring, like right now with this tour. Then we’ll probably be on the road more and more after this. Then just bigger and better things constantly. We’re excited!

The Best and Worst of Outside Lands 2014

Rita Ora forced to delay the release of her new album following split from...