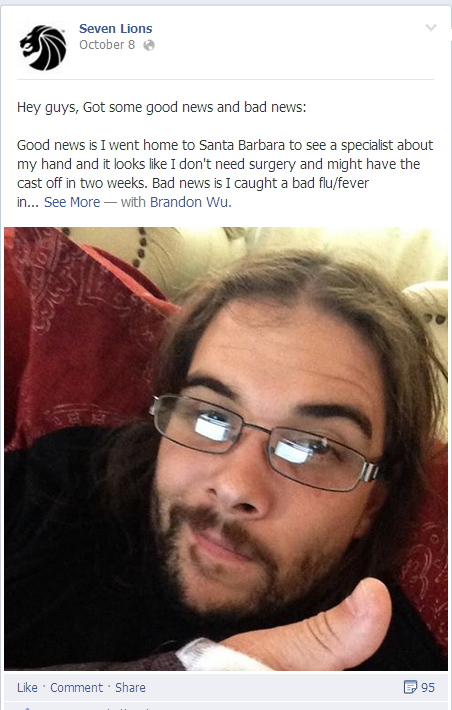 Unfortunately, Seven Lions  (Jeff Montalvo) dubstep and electro producer/dj took to his facebook to deliver some bad news. He has come down with a serious flu/fever and while returning home it became an bad case of airplane ear in which resulted in him losing hearing in both ears. He will be missing some shows dates on the “Get Wet” tour with Krewella and Candyland.

Hey guys, Got some good news and bad news:

Good news is I went home to Santa Barbara to see a specialist about my hand and it looks like I don’t need surgery and might have the cast off in two weeks. Bad news is I caught a bad flu/fever in Canada and on the way home I got an extreme case of airplane ear and lost hearing in both ears. As a musician this is probably the scariest thing imaginable. Fortunately my hearing has been coming back but I still need to go see a Dr. about it to make sure I did no permanent damage and I won’t be getting on another plane until I know its safe for my ears and my fever is gone. I have no problem playing sick, I have no problem playing with a broken hand but I just gotta protect my ears. I’m hoping to have this all figured out by the end of the week but I will be missing some upcoming shows on the tour. The tour has been fucking amazing so far so it really sucks to make this call but I know I will be up and running at 100% soon. I hope you understand. I’ll make it up to you guys.