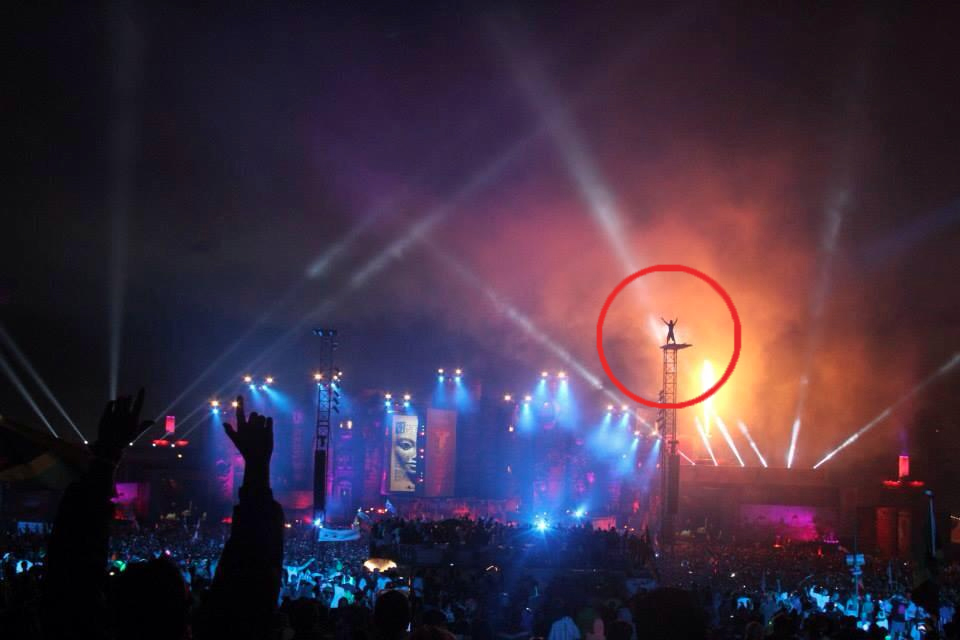 Every festival has that one epic moment. Atlanta producer and artist with the Kooly Bros (song credits include Gucci Mane, Waka Flocka Flame, B.O.B., Future, 2 Chains, and Travis Porter) Greg Tecoz aka G Fresh became a TomorrowWorld legend instantly…”The King of TomorrowWorld!” He has climbed where no man has climbed before; and probably where no man will ever have the chance to climb again.

Where was the best view at TomorrowWorld? Well one brave and crazy man found it! At the end of Armin Van Buuren’s set at TomorrowWorld’s main stage a man begins climbing a tower/scaffolding towards the rear of the main stage area.
G Fresh turned to his brother Jeff and told him he was going to get a better view. 
“Beyond wasted and out of my mind. No thoughts of any consequences were going through my head.”

“I was just going for it, I was in the moment.” “Security tried to stop me but after a while they stopped following.”

“Thousands of people, crazy ass lights, the music was literally in my face, it was an experience God wanted me to see. I will remember this moment my entire life. “

Everyone is wondering did you get a photo at the top?

“Phone died right before I reached the top I did not get a photo.”

“Maybe that was God saving me if I had tried to take a picture I may have fallen off.”

Witnesses saw G Fresh get tackled, subdued and taken off by security. G Fresh did not shut down TomorrowWorld, nor did he start a riot as the rumors going around online are claiming. However this stunt almost ruined the night for some people near by who were scared he may jump. Some people were even shouting for him to jump. G Fresh stated he could not hear anyone in the crowd and he loves life he was never going to jump. After the incident G Fresh was taken to the hospital for stitches in his hand.
This is an Injury from climbing down the tower not from security beating him up.

Moral of the story…We need to remember it’s not just about ourselves, our actions can affect everyone else’s experience. Be Safe and Rave On!

Everyone at TomorrowWorld was happy that this stunt didn’t take a turn for the worse like what happened in Sydney Australia last year.

If you have more photos/videos please email them to RaversChoiceInfo@gmail.com