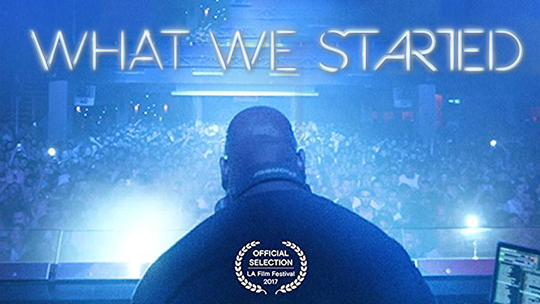 To the a casual fan of dance music of today, both young and old, the deep, rich, and somewhat hidden history of the genre might come as a surprise. A big misconception about dance music is that it is something new and only trending over the last decade due to the EDM boom. On the contrary, dance music has a fascinating timeline of its evolution dating back to the 70’s. From underground to mainstream, the dance music world has progressed into a massive phenomenon that has captivated the globe for so many years.

The brilliantly filmed Netflix documentary What We Started hooks with pairing two world-famous DJs from completely opposite ends of the dance music spectrum: legendary veteran Carl Cox, and the young EDM phenom Martin Garrix. While examining the point of view from both the underground and mainstream sides, the film takes a deep dive into the complete history of how dance music formed into what it is today, a multi-billion dollar industry.

“Underground dance music is about art, and EDM is showbiz,” DJ and producer Seth Troxler explains. Whether you like it or not, EDM is a product of the underground no matter how commercialized the industry might become. The pop culture influence to EDM today just shows how the music evolved in such a way that the secret little underground world of dance music transformed into a global sensation. When Carl Cox and Martin Garrix have a conversation about DJing, young Garrix is completely blown away that Carl Cox told him that he played for 10 hours straight without playing the same song twice. Martin Garrix on Carl Cox’s 10 hour set accomplishment, “I can’t think about playing for 8 hours in a row and not lose the attention of the crowd.” It is surprising, but it sort of shows viewers that there is a clear difference between a DJ who does it for the art of DJing versus a DJ who just wants to play hits for a large crowd. The two opposing viewpoints of mainstream and underground collide, and it shows just how broad the dance music scene is currently. The interview material from What We Started was absolutely fantastic. There are so many interesting statements and anecdotal stories told from some of the biggest key players of the dance music movement like Paul Oakenfold, Carl Cox, Pete Tong, Pasquale Rotella, Disco Donnie, and more. What makes this film so fascinating is that the two sides are so vastly different, yet one stemmed straight from the underground and EDM is the result. This can show most of the people who are not aware of the rich past of dance music that this is not something new. Perhaps the EDM boom is new to most, but that is just a direct result of something that was started many years ago by some hard working individuals to get dance music to where it is today. This documentary can be viewed right now on Netflix. It will open your eyes to the fantastic story of how dance music began as such a small exclusive underground world to the massive EDM phenomenon of present day. The story of how this exclusive unknown world was able to crossover into the mainstream world is truly amazing, and now we have a brilliantly produced hour and a half documentary to lay it out there for all to see.

50 Most Important People in EDM| by Rolling Stone