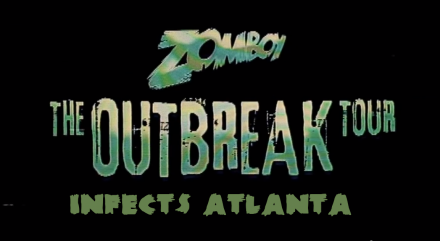 Rather than milk and cookies being everyone’s favorite, how about zombies and cookies instead? Sounds like an insane and gross combo right? Well last Friday, May 23rd, that combination was made a reality for Atlanta when two dubstep masterminds known as Zomboy and Cookie Monsta, bestowed some heavy bass to the city. The event at Opera Nightclub was apart of the first week of Zomboy and Cookie Monsta’s Outbreak Tour for 2014.

Both Zomboy and Cookie Monsta are dubstep producers from the UK, and have been doing several collabs recently, so it was no surprise to see the two on tour together starting earlier this month. The two dubstep superstars were a great blend, which combined both dark heavy bass, with that wobbly dubstep we all know and love, along with a little bit of electro house as well. Cookie Monsta was more on the darker dubstep side with heavy wobble, and then Zomboy brought out the electro house and more traditional dubstep feel.

Another amazing addition to this dubstep filled evening was the incredible visuals both Zomboy and Cookie Monsta displayed during their sets. We were blown away at the creepy and odd visuals that were flashing before us during Cookie Monsta’s opening set. While his dark and heavy wob dubstep was blasting in our faces, we were also showed visuals of a very creepy sadistic looking clown face that appeared several times across the illuminate screen. I don’t think there was a person attending that didn’t talk about how creepy, yet awesome those visuals were. Of course, Zomboy followed up with his odd, zombie-influenced animations as well. Each set’s visuals set the tone for each song that both Zomboy and Cookie Monsta masterfully blended together.

Overall, the event was a great success for the duo’s tour. Atlanta was infected with the Zomboy virus, and fed cookies by Cookie Monsta after his set was over. Who knew zombies and cookies would go together? The guys at Liquified did a great job with bringing in two great dubstep producers in one night. This was not the first time that the RaversChoice crew has witnessed an awesome Zomboy and Cookie Monsta show, and it definitely won’t be the last time either. Be sure to check out the rest of the dates of The Outbreak Tour for a city near you and experience Zomboy with Cookie Monsta for yourself.

Find the tour dates below, and CLICK HERE for tickets: All About That Bass: EDM comes to IU Southeast