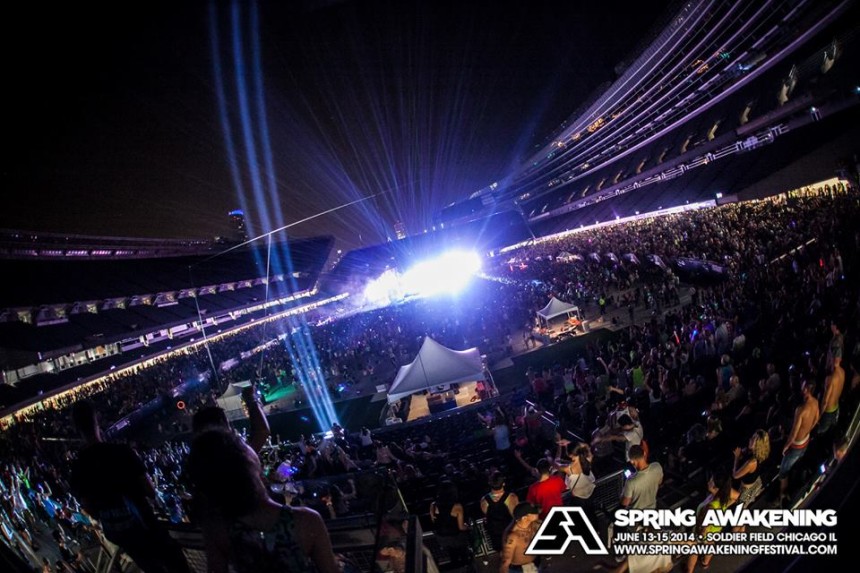 There is a reason that this year will be my third pilgrimage to Spring Awakening Music Festival on June 12-14th, in Chicago. Actually, there are several reasons why. Here are my top ten:

1. The City– If you haven’t seen a music festival in Chicago, then please do yourself a favor. People will argue for days about where house music started; but you can’t deny that when Frankie Knuckles (may he rest in peace) first mixed disco and eurobeats in Chicago and it had an effect on all of our lives. This city feels like the birthplace of house because it is, and this is the reason that Chicago is known as a music festival city around the globe. 2. The Awakening– The reason that I have seen SAMF more than any other festival in Chicago is the timing. Chicago house-heads have been cramped up in clubs all winter, and they need to get out and rage in the sun. Spring Awakening unleashes that pent up energy from the first drop to the last after party in a relentless manner. I don’t care how hard you think you rage, this festival goes harder. The weather is typically perfect in Chicago at this time of year as well. 3. The Venue– This festival is held in downtown Chicago in and around Soldier Field. The main stage is setup on the field with some additional stages created just outside of the stadium. Soldier Field is a cathedral designed for football that works perfect for a music venue. The city is also very accessible from this location which makes transportation, lodging and finding an after party a breeze. 4.  The Saturday Night Bass Kitchen– I recently saw Zomboy at Counterpoint in Atlanta, and I can confidently say that he deserves to headline this branded stage. This is my ultimate precursor to the Midwest debut of Jack U.

5. The After Parties– Even though the after parties have not been formally announced yet, you can receive updates sent to your phone which tell you when and where they are from the SAMF official website. I plan on getting grimy somewhere Friday and going to the Mid on Saturday. Many of the after parties sell out every year for this festival because, who likes going to bed after listening to some amazing music all day at SAMF? 6. The Sunday Beatport Stage– Jamie Jones is headlining this one and being an ATLien, I’ve only seen him at TomorrowWorld. This guy is too busy traveling all over the world, so seize the opportunity to see him while you can. MK is a legend and having Dirtybird’s co-founder, Justin Martin there can only make me pray that the surprise guest is Claude VonStroke.

7. The People– Chicago is the capital of the Midwest to me and it is the Mecca for any Midwesterner who likes to party. Everyone I know from Chicago is beautiful, a pro at partying, and don’t be surprised if they know more about house music than you do. They grew up on it. 8. The Friday Night Trance Arena – The first branded stage is the perfect sound to start your awakening. React did a great job with this lineup by easing us into the weekend with Paul Van Dyk, Cosmic Gate, and Andrew Rayel.

9. The Local DJs– The Chicago local DJs are world class talent. I can still remember the first time I saw Zebo at the Mid. I couldn’t believe he was the resident DJ for the night. It goes beyond thinking, “Hey, this is a great opener.” I also highly recommend you don’t miss Soul Tech ft. Gene Farris & Dustin Sheridan. 10. The Rising Talent– MIJA was in Atlanta last winter; and it was my first opportunity to see this LA-based DJ/producer who I learned that night is actually from Pheonix. She played a set that sounded like nothing I had ever heard before. It was a mix of deep house and bass which definitely showed her west-coast roots. She is the future, so keep your ears open for MIJA. Could your kid be the next Calvin Harris? Here’s how to find out

Made In America Philadelphia In Words & Photos

Adam K – Is There Anybody Out There (Evoke Vocal Edit) [EDM.com Exclusive]