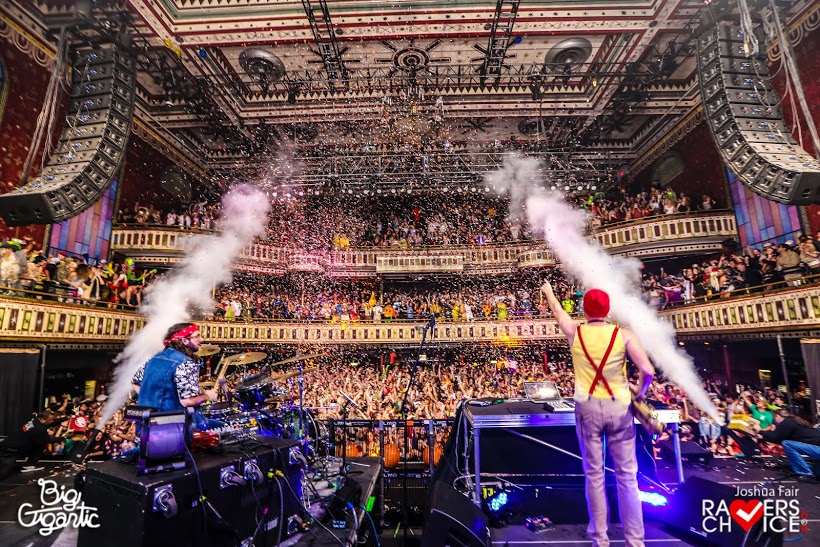 On the night of Halloween in Atlanta, people packed into the historic Tabernacle venue to get funky with the one and only, Big Gigantic. Atlanta has always been very supportive of the unique duo from Colorado known as Big G. The group did a show on the same night in Atlanta in 2013 with great success, and this night was certainly no exception. This event was part of Big Gigantic’s Touch The Sky Tour, and along with them was Paper Diamond.

Attendees came dressed in all sorts of costumes for Halloween, and were more than ready to dance the night away. From the start to finish, the dance floor stayed packed out and the vibes were palpable. The guys came out on stage dressed as Cheech and Chong, which I found was oh-so-fitting for the two. There was not a person in the venue that did not have a smile on their faces. Everyone was getting down and funky to the awesome music that the guys were playing.

Big G played a lot of music from their latest album, The Night Is Young , and infused many popular electronic tracks of today mixed with that wonderful sax sound we all know and love. One of my favorite points of the night was towards the end of the performance where the guys played an edit of Michael Jackson’s, Thriller. The large monitors on stage played clips of the famous music video, and the whole crowd went crazy when they added the drums and sax into it. I saw everyone doing their own interpretation of the Thriller dance, and it was just an all around fun moment of the show.

The crowd was amazing, the music was funky, and the night was definitely one that I, or anyone else who was there, will never forget. The city of Atlanta truly loves Big Gigantic, and that is why these guys love to play there as much as possible. These guys are a treat to see live, if you have not done so, you need to make that happen soon. Check out their latest album below, The Night Is Young.