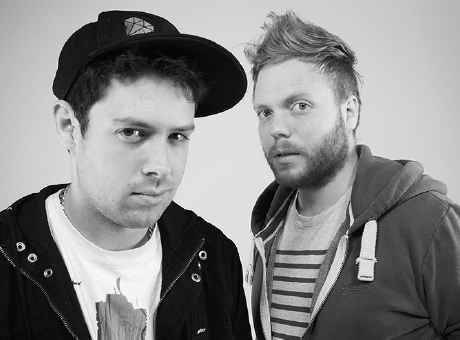 (Atlanta, GA)– Dodge & Fuski have been ripping through the EDM world since they first emerged into the scene many years ago. From experimental sounds of glitch-hop, and ever rising drum & bass, to neck-breaking dubstep, these guys played it all. The UK DJ duo has been twisting the sounds of one of the most popular electronic music genres for quite some time, creating an insane “Disciple” signature sound. Ravers Choice got to chat with the Disciple label creator Dodge & Fuski shortly after their performance at Believe Music Hall in Atlanta, Georgia. In this interview, Rob Talbott (aka Dodge) touches on his involvement with music, his inspirations and how the legendary Disciple got established.

Tell us a little bit about yourself. How did your journey as a music producer begin?

By chance, really. A friend owed me some money, but gave me an old Groovebox (a sort of self-contained music sequencer) called an Roland MC303 instead. This was during the days when software was starting to take over, but people still owned a lot of physical hardware for music. Honestly, this was in my teenage years and I didn’t have a particularly formed overall life goal at the time, so I just decided to see where experimenting with music took me. I ended up in college, meeting Fuski, then university, and then fast-forward about 17 years and here we are.

The music scene in the UK is quite different than here in the US, how was it to grow up there and pursue music full time?

In some ways, easier; in some ways, harder. We have a very robust social security safety net in the UK, which (while it’s primarily intended to make sure that people who lose their jobs have basic funds to survive from) also gave people like us the feeling of safety to pursue a risky career that might not work out. The flip side was that the amount of money in the music industry in most European countries (particularly when it comes to bass music) can make having a full-time career very challenging. I won’t go into depth about the complex reasons for this, but a lot of very talented and often successful people still struggle to make ends meet and sometimes, sadly, end up giving it up because of this. I’ve been pretty lucky that the music we were all making ended up with its audience focus being transplanted into a country where you can have an opportunity for a viable long-term career. It certainly didn’t used to be that way, though…

In the early days it was almost entirely drum & bass producers, as that’s what we tried and failed to do for years before we got into dubstep. We weren’t big fans of it to begin with, but after people like Rusko and Doctor P started switching things up with a more fun, high energy sound I sort of immediately got it. It was the fact that there were so many unexplored ideas that really drew me in – for a while every month somebody came up with a totally new sound or some original concept. Obviously, these days it’s much more about engineering polish and refining a well-trodden path than the naive experimentation of the early days.

Do you find producing tracks to be an easier process when you’re using samples and presets you’ve made yourself rather than using ones from other artists?

Honestly, it totally varies. Nothing it more of a killer to creativity than repetition, so the simple answer to this by definition will constantly change.

How do you think the EDM scene changed since you first started producing?

It is dramatically more focused on marketing, which is probably the main thing now. I mean, we’re called Dodge & Fuski – it’s hardly a Marshmello-level memorable name, but back then nobody really thought about that stuff. These days, being memorable and selling tickets is a hugely complex issue and for better, or (arguably) worse, the music is not always the only voice doing the talking.

Are reactions to certain tracks different in different countries?

A few years ago I would have said yes, but these days that really depends on the people not the country. You get pockets of different tastes all over the world, and I think that just boils down to the power of the internet. Obviously there are exceptions – there’s not a lot of drum & bass gigs going on in the USA or a lot of Trap gigs going on in Wales, but out of the shows that do exist… you get my point.

Tell us about the Disciple record label. How did it start and what’s the correlation between Disciple and Never Say Die?

This is a long and complex story. In short, though, Disciple started when Skism suggested that I would be better off leaving NSD to do my own thing. I came up with the name Disciple (it was a lyric from an old Prolix tune that I thought sounded cool), met my business partner-to-be, Rossy, who already had some experience running another record label and would be the driving day-to-day force, and then we kicked it off with a bunch of Dodge & Fuski remixes that I knew would build some traction out the gate. Skism and his business partner at the time invested a small amount of money into the label that we used to pay for artwork and other early expenses (we bought them back out later), they introduced us to a distributor, and gave us a pdf guide with pointers on how to structure releases and so forth. That was more or less it really in terms of the business association, as Ross took the lead on most of the strategy roles in terms of label management as soon as we were a couple months in. Obviously when you become competitors it can lead to friction, in which, sadly, it did for a while but these days everyone is pretty focused on just doing their own thing. I think it’s a good thing that the 2 labels have grown further apart in terms of branding and marketing styles – NSD has always had an understated, classy art style and more restrained marketing approach; so we focused on bright colours and lots of youtube tutorials/comedy skits.

If today was the end of the world which song would be a perfect soundtrack?

Your EDM Exclusive Interview With SAVOY On Their Mo’ Lazers, Mo’ Problems ...