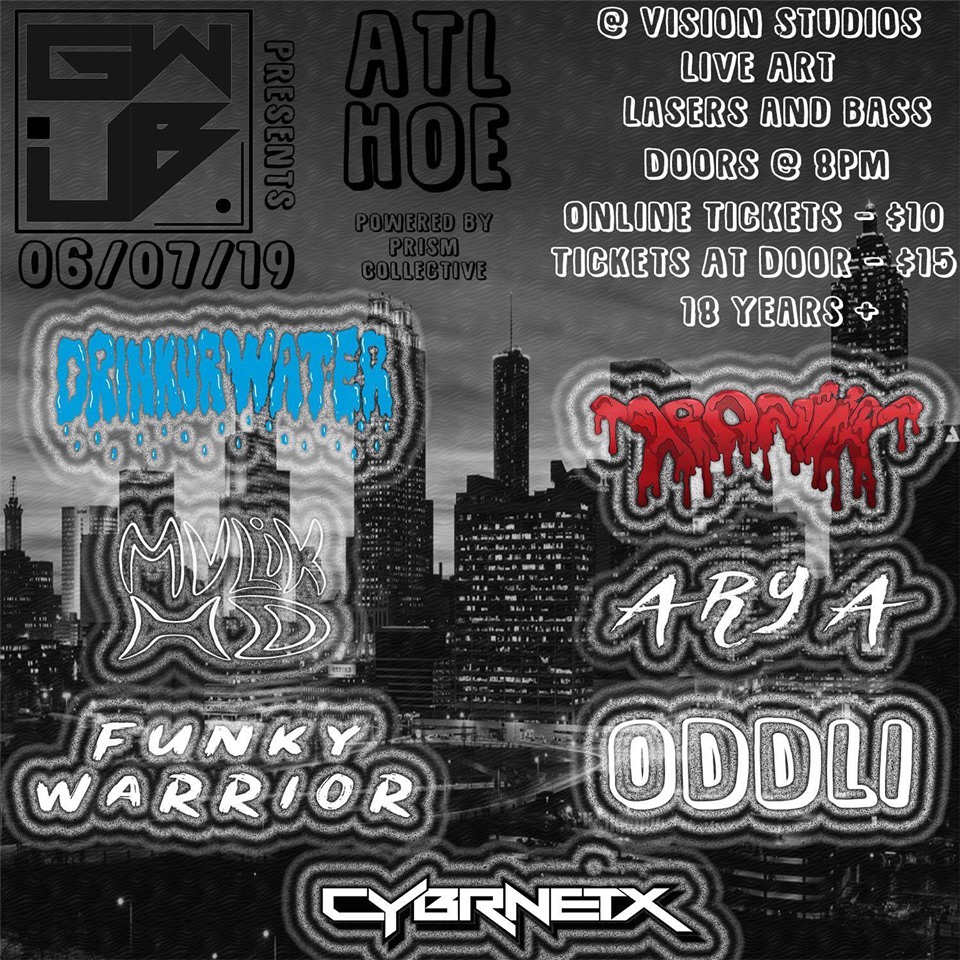 If you have no plans for tonight and just thinking about Netflix and chill, well think twice. Atlanta EDM community is throwing one of the biggest local talent showcases. From well established names like DRINKURWATER to a debut of an actual Robot CYBRNETX, this event has everything a Raver could dream of. This is a round 2 of the ATL HOE event put together by G-Wub and its theme is a space bass mixed with heavy bass, so you better get ready (warm up and stretch if you’re old like me lol). ARYA is about to bring you some serious heavy basslines mixed with wobbly and genre-blending sounds that would send you on a space trip. His mind-blowing dubstep and riddim tracks are something every crowd is anxious to hear. Then there is KroniiK with his heavy Riddim infused sets and an enormous contagious energy that would make even a Said The Sky fan lose it on the dance floor and headbang till you drop.  As I mentioned earlier this is a debut performance of a local hero-drummer-robot CYBERNETX Jason Barnes. Jason has a robotic arm and not only can play drums but also DJ (WOW!). Being an Icon Collective student and tutored by the best in the field like Protohype and Blanke,  his style resembles 1788-L, Rezz, Blanke and K?D, in other words glitchy dark and evil mid tempo that would make you question your own existence. This newcomer sure has some tricks up his sleeve and we can’t wait to witness a birth of a new local legend. Catch him at 8:30 pm.

On the other hand, Kevin Flum known as DRINKURWATER is a local favorite and obviously a badass producer. EDM giants like Snails and SAYMYNAME dropped his tunes at this past EDC making the crowd go loco. His most recent sick new collab “OH F*CK” with RATED R is a riddim-based tune with heavy basslines and angry lyrics is about to destroy the venue tonight. Much anticipated act goes on at 2:30 am.

Hosted by Prism Collective, a collective incubator of creative minds, this event sure will bring you THICK bass and ridiculous visuals. Other acts include MVLIK HD, ODDLI & Funky Warrior.

Also there will live art, a ball pit and some merchandise so you can have a great rave night!

Tickets and full event info can be found here.