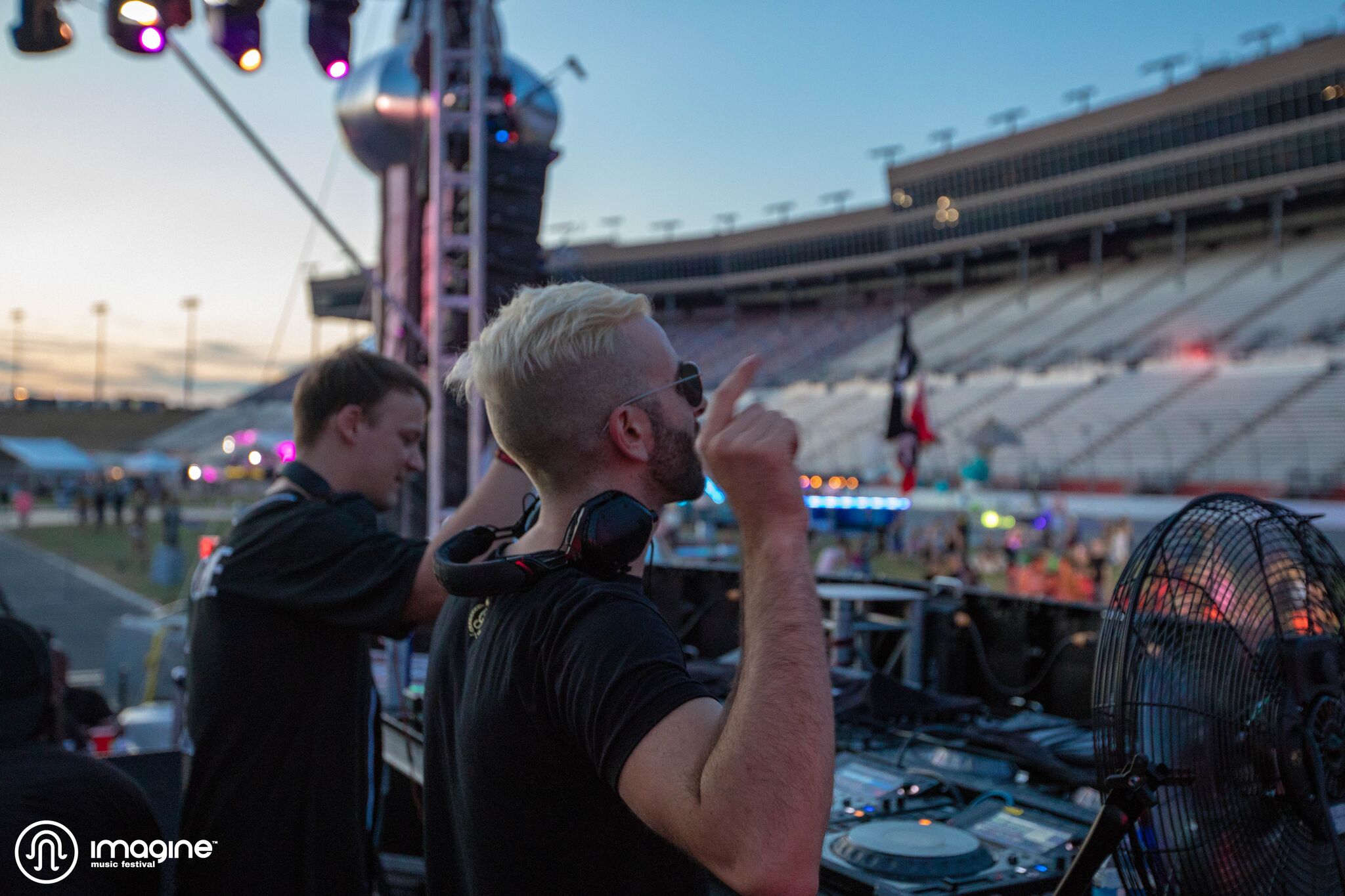 Alex Dunkser and Josh Taylor make up the producing and DJ duo known as Halogen. Based out of Atlanta, Georgia, the pair has been part of this growing local dance music scene for a quite few years. Halogen has begun to emerge onto the scene with their fresh, unique style of house music that has gained them a considerable amount of attention, especially on the local and regional scale. The group has been making lots of noise throughout the local scene with their creation of a new event called Housewerk, which is been a great success for Halogen so far. This recurring house music party has served as a special platform for showcasing their latest tunes to fans, as well as sharing some of the hottest house beats circulating the dance music industry to an intimate and exclusive local Atlanta crowd.

Halogen recently played at the 5th anniversary of Imagine Music Festival held in Atlanta Motor Speedway. We got the chance to speak with the duo before their performance to discuss the positive impact of Imagine on the local EDM scene of Atlanta, the growth in popularity of house music on the local level, talk a little about Housewerk, and their contributions to the house music scene. This house music duo from Atlanta has emerged as one of the hottest local names from the city’s scene, and the journey is just beginning for the two.

It’s been great to see all the local support at Imagine Music Festival. What do you think about the big transformation they’ve made since the 2016 expansion?

Alex: Our first Imagine that we went to was two years ago when it moved to the speedway. It’s [IMF] has really come along way, and it’s pretty crazy. I don’t think that anyone saw just how big this was going to get. Imagine has really come together as a festival. We are going to keep coming back every year, and we hope to keep playing here as well.

Josh: I went to the first Imagine when it was at the Old 4th Ward. I didn’t think that it would be as scalable, because they really didn’t have much room to work with at that venue. It has a ton of growth potential now, though. I mean, this place [Atlanta Motor Speedway] is comparable to the size that EDC Las Vegas is. The sky is the limit for these guys.

Speaking of Imagine, I’m sure you know they’ve recently opened up their game-changing venue called believe music hall. I checked it out on the soft opening, and it seems like it’s a refreshing new venue for Atlanta. Have you guys been able to play there yet?

Alex: Yeah, we’ve played there a couple of time. I really enjoy going there as a fan and to perform. I like the vibes and everything about it so far.

Josh: It’s a great size for the venue, and they have a really solid set up with the different stage areas. I like how they have the different environments to separate the types of genres that they want to have playing in each area there. I think that is something unique that they didn’t really have at their old venue [Rush Lounge].

Since I have been involved with the local Atlanta scene, I’ve been following your journey for quite some time. I’ve noticed that you have produced a couple different styles through the years. What helped you develop into this current style of Halogen?

Josh: I would attribute that to just getting older and the maturation of what we like as individuals. There are obviously those shifts in styles with the different trends or fads for some producers. I feel like over time, not only does your production quality and style change, but what you want to create actually changes as well. House music is just kind of where we ended up finding our niche in.

You have recently created a new brand for Atlanta’s house music scene called Housewerk. Do you think that your contribution with this new project is something that has helped boost the popularity of house music within this local scene?

Alex: We absolutely love it! It is really great to be able to contribute to such a growing scene in this city that has never really contained this underground house music market before. I don’t think that anyone thought that it was actually possible, to be honest. Now it’s becoming huge, and we are just really happy to be part of it.

Josh: I think it’s something that Atlanta didn’t really have until recently. We’ve experienced a ton of shows in Miami, and we liked the vibes there so much. We had the idea that there would be enough ike-minded people in Atlanta who would want that same feel; but really we just wanted to create that dark underground vibe. That was the main thing we wanted to accomplish.

Alex: Yeah, I can’t believe how popular it’s become. It was a place that we could showcase our music on our own terms, and it really just set everything from the ground up.

You guys have been around in this local scene for quite some time. What is your observation of the evolvement of the growing dance music scene in the Atlanta market?

Alex: It definitely has evolved a lot. It’s evident with other promoters as well, like Liquified, bringing in more and more headliners that they probably never would have booked even just a few years ago.

Josh: There are also a lot of new venues popping up now. I think that house music from a popularity standpoint is growing in general, and it is really nice to see that happening. I think a lot of it has to do with how fast the city is growing with more people moving here, especially from big music markets like LA and Chicago, and the demand for more entertainment is increasing.

With this Housewerk project you’ve been working on, do you have any goals in place for this, or are you just looking to see where this takes your brand as Halogen?

Alex: (chuckles) Well, it’s actually kind of hard to answer that right now. At this point, we are down for anything. It really has a lot to do with the logistics, because we don’t want to do it unless it feels right. However, we would be interested in throwing larger parties for Housewerk if it is done correctly. There are so many potential venues to work with, so I’m sure something will happen in the future.

Josh: I mean, we really want it to stick to that same vibe that we originally were going for. The goal is to stick to the brand, and it just needs to align with that, otherwise, we wouldn’t want to go bigger. But in regards to scale, I think that right now, we just want it to be the best that it can be.

Your most recent track release, “Here Before,” seems like a great summer send-off vibe. Will this be your first debut of the new single on a big stage like Imagine Music Festival?

Alex: Yes, we will definitely be playing it today 100%, and we’re excited to do that. We have been throwing it into our sets for a little while now and it’s good to finally be able to release it officially. We took some time on it because there have been lots of revisions.

Josh: Yeah, it’s gone through some phases. Also we’ve had lots of revisions with it!

Are there any plans for Halogen to seek a record deal in the future, or would you rather keep the brand as independent for now?

Josh: As for right now, I think that staying independent and having that flexibility to be able to create what we want is what we are doing for the time being. We did consider doing something like releasing an EP at some point, but we’ve kind of pushed that one back for now.

Alex: I think that we are better off with just having singles released on certain labels, rather than a major record deal. There is one that we are releasing later this year on Insomniac’s house label called In / Rotation. We have also released some music on CloudKid, which is a popular YouTube channel that also has its own record label, along with music on Selected and Spinnin’ Records as well. As you can see, it’s really just track-by-track with the labels for us right now.

I can see why you would want it that way so you could work on developing your sound to allow you to pave your own way as producers.

Do you have anything coming up to finish your 2018?

Alex: Aside from Halogen, I will be running production for Minnesota on his upcoming fall tour, Adventures Through Space and Time. I will not be performing, though. It’s just to help with production for his tour, and I’ll be on the road for two months. It will be great for my portfolio, for sure.

Josh: And we do have a couple of new songs that we will be releasing later this year, which we are looking forward to that, of course.