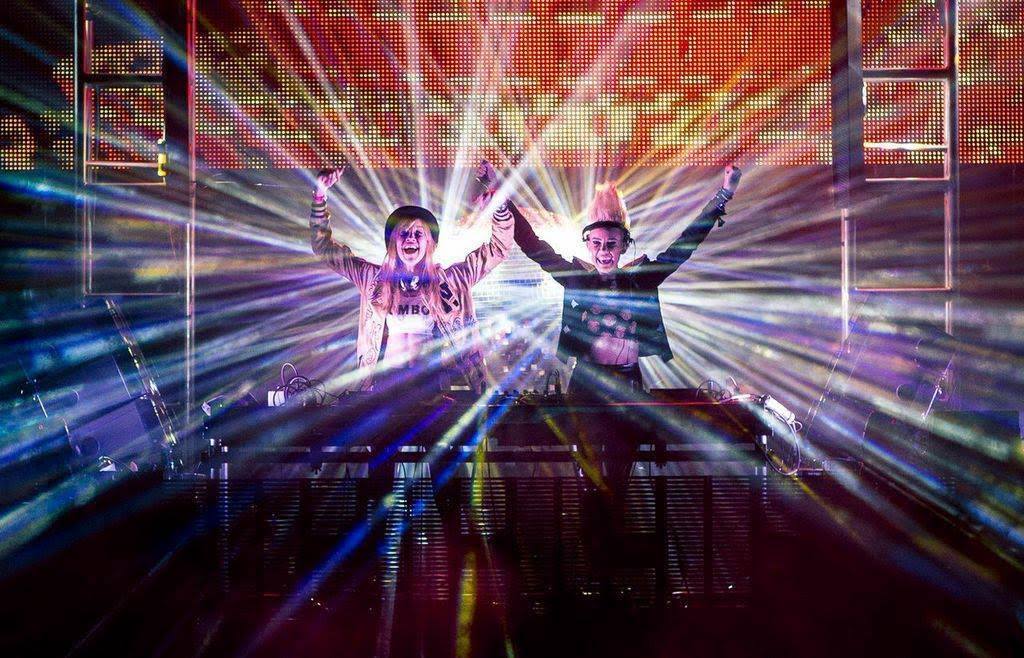 (Atlanta, Ga) – Oh, what a performance! This past weekend the Aussie duo NERVO brought some serious vibes, and they completely destroyed the dance floor at Believe Music Hall in Atlanta. These incredibly charismatic twins promised to start a revolution and oh, boy they sure did. From the moment they appeared on the wildly male dominant scene, to the point of having their own NERVONation stage at Tomorrowland, these girls have been breaking the rules, blurring the lines between genres and constantly surprising the world with their energetic sets. From our favorite tracks like “You’re Gonna Love Again,” to viby trance and even psy-trance, their set had everything you could possibly think of excluding Riddim, of course. Their energy and vibes were contagious, making the crowd feel it like never before. We got lucky to catch Miriam and Olivia before their set. The duo shared about their humble beginnings, favorite moments in their career, and the best flavor of Tim Tams.

RC: So the music scene in Australia is completely different than here in the US. How was it to grow up there and pursue music full time?

MIM: Well, I think growing up in Australia is great because we get a lot of UK/British music and we get American music as well, so we got exposed to a lot early on.

LIV: Yeah. And that was a big reason for us moving to the UK actually because we were very inspired by Fatboy Slim, and The Prodigy. So, that’s what we were trying to be both.

RC: Have both of you always wanted to be DJs or?

LIV: No, God, no. We’ve started off as song writers and we’d love to DJ on the weekend, but the DJing was never like the focal point until about seven years into our writing career.

RC: Oh, wow. Okay. Your looks are definitely something that sets you guys apart, how did you come up with them?

MIM: Everyone’s said, we think about it like me doing the mohawk and Liv doing the hat. But no, we didn’t. I’ve always had short hair, quite long for me now, and Liv loved hats. I actually don’t like wearing hats because I get too hot.

MIM: But I get too sweaty.

LIV: And I think what happened is, our lives started turning more into kind of gypsies like we do. So when you have a hat, you wear it all the time because it’s not like you have a normal wardrobe that you can bring away. You have to wear it at an airport because you can’t pack it in a bag or it gets wrecked, so suddenly I’m wearing it all the time and then it becomes kind of like my look because then I have hat hair so I can’t take it off at a Gig. So then it just became a thing. A thing, yeah!

RC: When you perform you always have an insane energy and crazy vibes, are you the one inspiring the crowd or does the crowd inspire you?

MIM: They inspire us. I think the music inspires us and the people. If we’re not getting vibe back from the people in front of us, we really don’t enjoy the gig as much. We spin what we do and we just switch into “okay, let’s try something different.” Having a vibe in front of us makes all the difference.

RC: Is there a specific track that you like to drop the most in your sets?

LIV: Well we play a lot of our own music.

MIM: At the moment I’m loving our mash of “Destination techno” and “The Way We See the World.”

RC: That’s an awesome one! What is a common misconception most people that haven’t been to Australia have about it?

MIM: That people die of insects!

MIM: Apparently there are deadly animals in Australia and in the ocean, great white and that kind of stuff. But people think it’s super-duper wild.

LIV: Yeah. And that Aussies are really tough, I think because we kind of had to put up with like the deadly spiders, deadly snakes and everything.

RC: As 8 year veterans of Tomorrowland, is there a year or performance that stands out to you when you think back?

MIM: Well, every year is so insane, honestly, and they each have their special moments. This year was pretty hardcore because I fell off the mainstage, and really hurt myself.

LIV: She got a bunch of stitches from it you can still see a cut. It’s still healing.

MIM: Yeah it was very painful. Yeah. Basically every year is special. Having a NERVONation stage is really special.

LIV: Oh yeah. I think last year’s NERVONation stage was a real picture perfect moment. And that wasn’t even a main stage. I think a main stage standout would be that first time we did sun set time slot after Diplo.

LIV: Okay. For the current trend that I wish would disappear is I don’t like this kind of depressed vibe thats come through like this suicide movement. Unhappy People. Yeah. The happiest, unhappy people in a crowd kind of vibe. I’m all for expressing yourself, but

MIM: We play a moment of dark music

MIM: I think that whole movement is a bit, sad. I don’t know… “I wanna go on the dance floor and smile and like feel the vibe…

LIV: Go on a Journey.

MIM: And not feel sad.

LIV: And that’s something we wish would go. And then the one that we wish would stay, I think that “underground” is really coming back in a big way.

MIM: we definitely hope that stays.

RC: So we ask every Aussie this question. What’s your favorite flavor of Tim Tams?

MIM: Oh, I like the plain and simple Original.

LIV: No I do like the white one. I love the white.

RC: One more question. What’s in store for NERVO for the rest of 2019?

MIM: Releasing music! Yes. We have a load of records at the moment. So yeah! Music, music, music!

March Of The Afrojack – Part I (Introduction & Growing Up) + Part II...