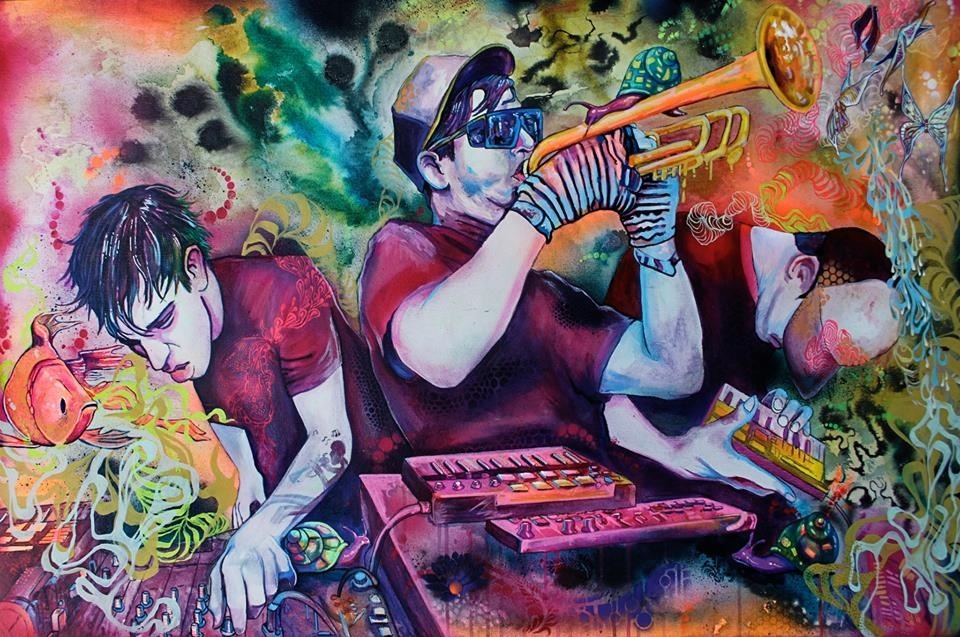 This year in Atlanta on Friday the 13th instead of Jason coming out to kill, Russ and Jake aka Thiftworks murdered it at Terminal West. If you don’t know their sound it comes from the Bay Area of California. The same bass breeding grounds that produced Bassnectar. Russ Liquid and Thiftworks have a common denominator of syrupy, drippy bass each with a little different approach. Russ Liquid is a classically trained in the sax, piano, trumpet and flute. You will see him break at least one of these instruments out and go crazy on it for at least a few tracks. Those of us at Terminal West last Friday were lucky enough to experience both the flute and trumpet multiple times throughout the show. I have never been so excited for a flute solo (outside of Anchorman) as I was Friday night. Hearing Russ play either the trumpet or flute live over beats is hard to contend with and a very unique experience. It absolutely works! Thriftworks on the other hand can slow it down a bit more compared to Russ and bring very enlightened sounds and ambiance to the venue. It is the calm before the storm and the few moments of low tempo are often shattered with Russ Liquid coming back out on stage to join in with the Trumpet. Thriftworks and Russ Liquid together are sum that is greater than equal to their individual parts. The combination of the two live seems so natural and they played many tracks they created together which was unique from the last time Thriftworks came to town with Bassnectar.

Once Thriftworks went on it wasn’t long before he brought out some stage dancers to pump life into the venue. These are not common Go Go variety. Thriftworks brought out the Dragon House Crew. These are guys that can do the robot better than a robot. Their moves make you question if they are double jointed or even human. They were constantly throwing out mechanical moves and rotating through the dance crew throughout the entire set. The mix of the dancers, Russ on the trumpet and Thriftworks laying down the tracks boarders on performing arts. There is more than just a DJ to create the experience, it is a more complex and beautiful stage presence. Check out the Dragon House Crew below.