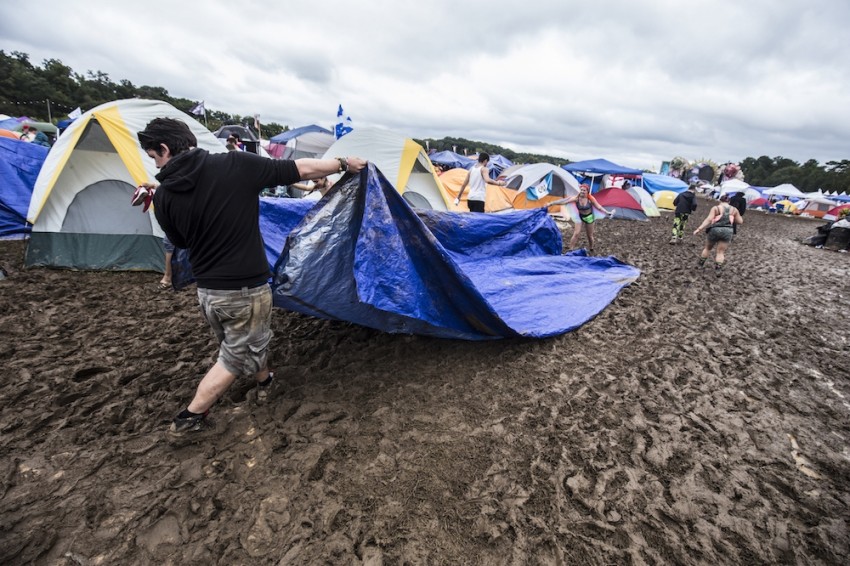 Last weekend, TomorrowWorld lost its Key to Happiness to Mother Nature and it never returned. Rain, rain, and more rain throughout the weekend caused terrible conditions for the grounds of Chattahoochee Hills, Ga. The once beautiful Bouckaert Farm quickly turned into a giant mud pit by Friday evening, and only got worse as the weekend progressed. With media outlets, as well as massive amounts of people on social media sending a hailstorm of negative feedback concerning the way TonmorrowWorld handled everything, a PR spokesperson responded yesterday. To many, this came as a surprise that they didn’t take any blame whatsoever for what happened. Spokesperson Debby Wilmsen, who represents TomorrowWorld and TomorrowLand was interviewed by BBC Radio 1 on the issue. She quickly blamed everything else besides the festival and its organizers. These statements might be a little tough to read in some spots. They have been translated from Dutch to English via Google Translate.

“It is normal that the tents are wet when it rains five days. There you can as an organization not do anything. That people have far to walk, has to do with the size of the premises. The distances are simply enormous, even in dry weather they would have to step away. It’s no different in Belgium… Many people no longer wanted to wait and begin walking on their own, and they got lost in the woods around Chattahoochee Hills. It is rural America, there is no transport and who does not know his way, soon gets lost.” “We have done the same as in Belgium. We have hay and wood bark scattered and some parts covered with mats. Chattahoochee Hills is a huge site, we can not completely [make] full set of ramps. It also just kept raining. You can put hay but it will at some point still [get] too wet. And you can not put coverings over 40,000 tents.”

Thousands of attendees who were not part of Dreamville camping were forced to walk up to 10 miles to get back to their vehicles in order to get back home. During this long walk, the rain still continued and the temperature was nothing but comfortable. According to the TomorrowWorld spokesperson, this was just a small amount out of the 190,000 fans who were in attendance at the festival. Regardless of that statistic, that small number of people still matter as well as the others. “[The US media] focus primarily on what they see via social media visitors. It is also about a small percentage of the visitors… It’s not fun to read on social media how many people are dissatisfied, but on the other hand, there are many more people who have had a very good time.”

Wilmsen did, however, admit that there was a failed communication during the festival. She hopes that the mishap does not tarnish the brand. Though it looks like there will be a bad taste in everyone’s mouth for a long time. The festival did apologize for any of the misfortune that the attendees had to endure throughout the weekend. TomorrowWorld also released a statement regarding refunds for any thing to do with Sunday passes as well as parking, but not for anyone who stayed in Dreamville.