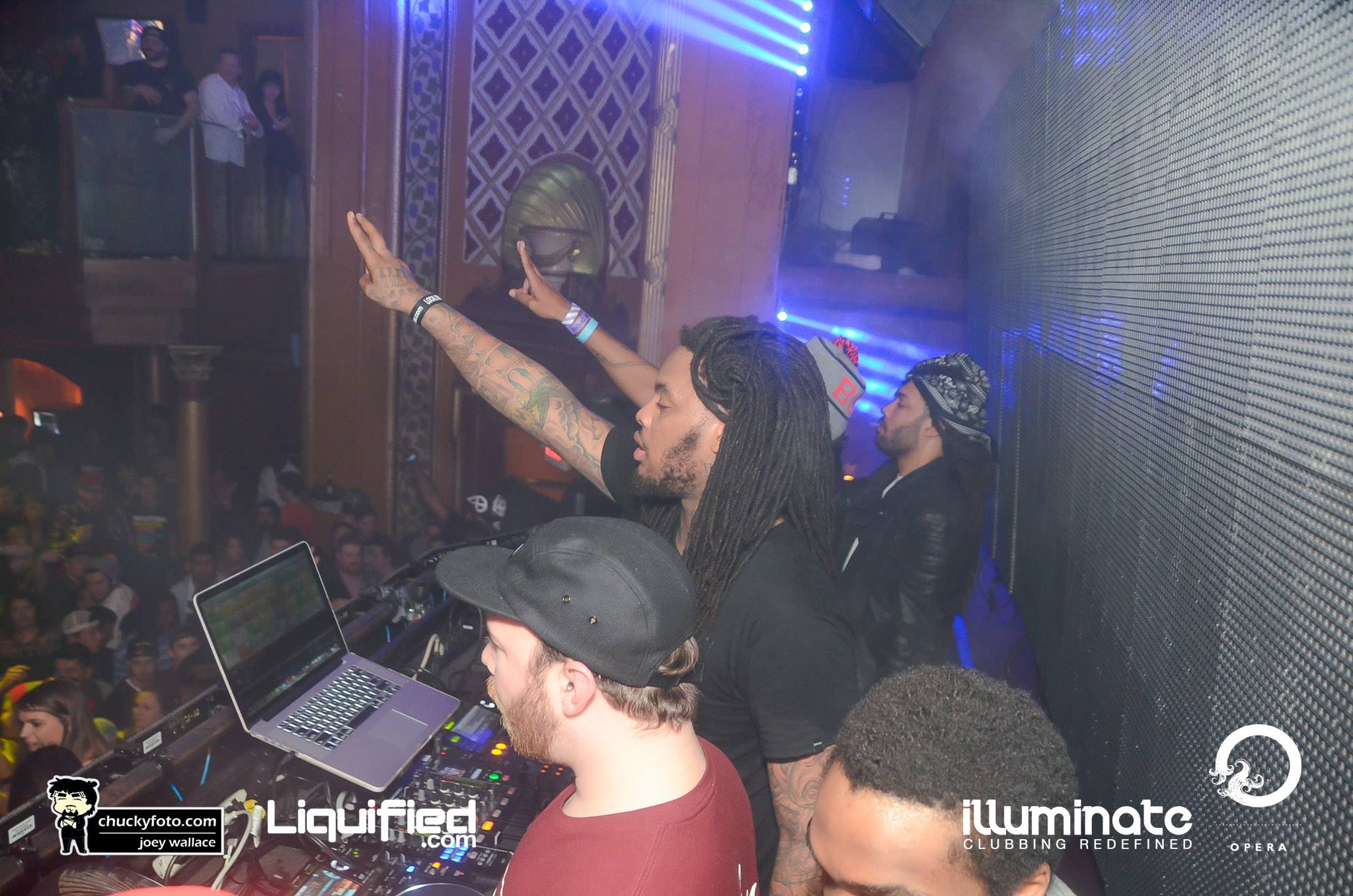 Just a few days before New Year’s, the guys behind the weekly Illuminate Fridays event, Liquified, brought in a triad of trap talent to Atlanta and a few other surprise guests as well. Waka Flocka headlined the show along with hometown trap favorites, Mayhem and Heroes x Villains. This was the last show of the year for Liquified, and I feel like they couldn’t have picked a better group of acts to cap off a great year of throwing events.

Both Mayhem and HXV have became a heavy favorite here in their hometown city of Atlanta. Though I thought it would be interesting to see how the audience would react to having Waka Flocka as one of the headliners. Waka Flocka’s involvement in EDM goes back to 2013 when he teamed up with Steve Aoki and Dim Mak Records. Waka has done collabs with some other big names in EDM including Flosstradamus, Borgore, Yellow Claw and even Skrillex. He’s made appearances at major music festivals such as Ultra in Miami, Moonrise Music Festival in Baltimore, and even TomorrowWorld, to name a few. HXV opened the night with a bang. It is always a pleasure getting to see HXV perform because his sets are just full of energy and can make crowds hyped. He played a great mixture of hip hop infused trap music that can win over any Atlanta audience. I loved getting to hear his latest track, “Made It,” which has that mid tempo, grimy trap beat that I enjoy.

Next to perform was the much anticipated, Waka Flocka. HXV did a great job with setting the tone for what Waka was going to bring to the table for Opera’s crowd that night. He came on stage with is high energy, head banging, club rap that he’s well known for. The crowd seemed to be loving every minute of it. Waka Flocka went through some of his classic tracks, and also throwing in a plethora of new EDM tracks that he has done collabs with over the past year. One of my favorite tracks that he played was the Flosstradamus remix of Steve Aoki and Waka’s track, “Rage The Night Away.” Waka actually did a great job and definitely kept the crowd enthused with some good trap and hip-hop music. The night was far from over, because the hometown hero, Mayhem was on deck in this trap music triple header. Mayhem has become a beloved name in the Atlanta EDM scene. He has also gained a residency with Liquified and Opera Nightclub, earning a quarterly performance spot at the venue. He was the last performance of the night, but certainly not the least. Mayhem kept the energy flowing and the dance floor pumped to close out the night with a huge set. Along with HXV, I’ve seen Mayhem on several occasions, and each time this guy just continues to impress me. He played some crowd favorite trap music, and even threw in some hip-hop, as he is known to do so. I loved seeing everyone’s reaction when Mayhem played his newest banger, “Karate.” It’s one of those tracks that make dance floors go crazy! Check it out below, it is definitely worth sharing.

I think this event was a strong way for Liquified to end a successful year of shows. Big props to those guys for putting in hard work each week to deliver great events to the city of Atlanta. Providing three huge names in Atlanta’s trap and hip-hop scene all under one roof made for a great night. With 2015 just around the corner, it’s looking like it will be a huge year for this promoter; and we look forward to seeing what they have in store for Atlanta in the new year.

DJ Snake & Lil Jon – Turn Down For What | Music Video