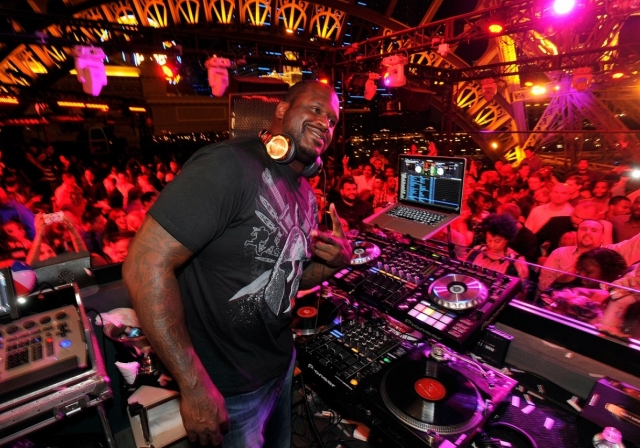 If you thought Paris Hilton becoming a DJ was crazy enough, you thought wrong! Brace yourself for this, because you won’t believe who else has decided to dabble in the electronic music world. Shaquille O’Neal has become a DJ known as DJ DIESEL according to TMZ Sports, who first broke the news over the weekend. Shaq, AKA DJ DIESEL, made his debut DJ performance at the Chateau nightclub in the Paris Hotel and Casino in Las Vegas last Friday night. Apparently the big man is actually serious about being a DJ.

TMZ spoke with DJ Irie, who is the the team DJ for the Miami Heat. According to Irie, Shaq has been practicing his musical talent for years while playing in the NBA. Here is what DJ Irie told TMZ Sports:

“When Shaq was in Miami he actually made a studio in his house,” Irie says, “We’d go there and make beats and do mashups. He was very much into DJ’ing. We actually made 3-4 mixtapes. We had a preseason game in Puerto Rico one year and I was there DJ’ing a party. Shaq came up to the booth and said, ‘Let me get on.’ The first song he played was ‘Move B**ch’ by Ludacris. He rocked me!”

TMZ does have a video of Shaq’s DJ performance from last Friday at the Chateau, but unfortunately there is no sound. We think that TMZ Sports might be wary of copyright infringement. However, we were able to dig up a recent video of the big man, known as DJ DIESEL, spinning along side DJ Irie during TNT’s Inside The NBA show. Here you can see DIESEL scratching in the booth with Irie, and you can get a little taste of what you might have seen last Friday night in Vegas. Check out the video below!